Having a birthday in January would probably be a lot more fun to celebrate if I lived in the Southern Hemisphere, but I don't. I live in Canada where January means a measly 8 hours of daylight, snow, bitter cold and no fun unless you're a weird cold weather masochist (which I am not).

Every so often, thanks to a warm westerly wind drawn over the Rockies from the Pacific Ocean called a Chinook, I luck out and catch a glimpse of what people born in May must feel like on their birthdays:

Such was the case of my thirty-fifth birthday, it was plus 8. PLUS EIGHT. In January. Plus eight, in January, in the mountains.  This hardly ever happens, and if you would like to prove how rarely this happens, you may take a look in my closet and see that I do not own any January party appropriate clothing, unless you count my awesome hat which I purchased for $2.00 from my local grocery store three days prior. It functions in all weather. 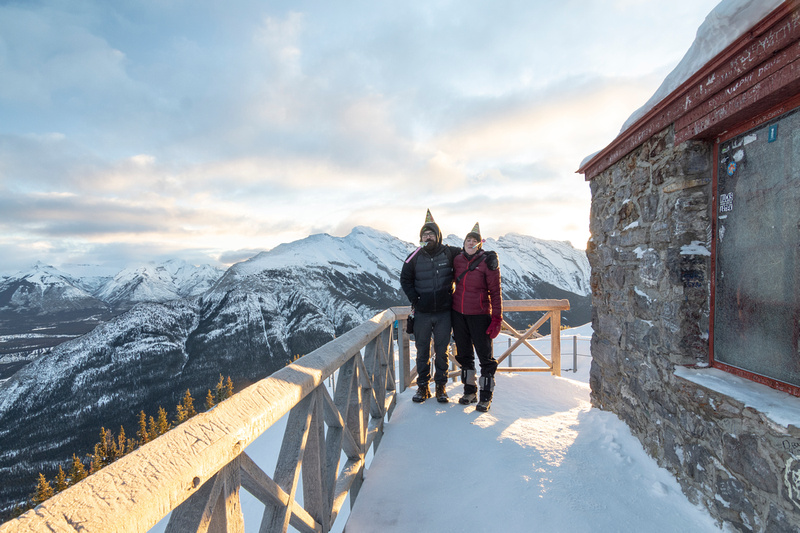 For the weeks leading up to my birthday, I was sort of tossing the idea of celebrating on a mountain summit somewhere, even contemplating the idea of spending the night alone, shivering in a tent, to facilitate the short day light hours and inevitable hours long slog through knee deep snow.  Instead, two things happened:  The first being that Mr. Bastard had the weekend off from work and suddenly I had a party partner.  The second was that it was plus freaking eight outside!   Suddenly my plans shifted from a solo trip (For the record, I have friends okay? But if you need more context, Google what introverts like to do for fun) to a leisurely weekend in Banff. We checked in to a hotel, and somehow I convinced Mr. Bastard to hike up Sulphur Mountain in the dark with me so we could watch the sun rise from the summit, drink Mimosas and eat cake for breakfast, and that's exactly what we did. 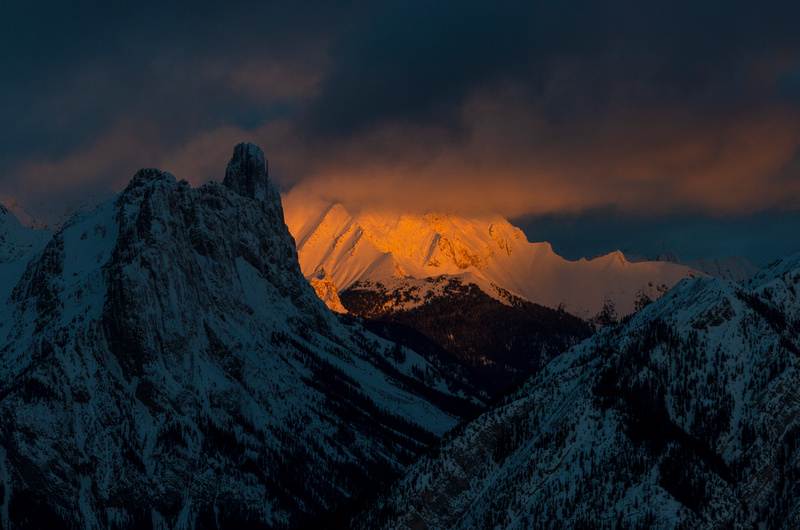 We donned our hiking gear in the comfort of our hotel room and took a leisurely five minute drive to the trailhead to begin our hike. I put on my boot spikes, headlamp and party hat and then we set out on the trail.  You have to love National Park trails, they are such a treat to hike on. Despite the snow, the trail was packed down by thousands of boots before us so we didn't need to worry about post-holing, the trail was wide and despite the elevation gain it was so nicely constructed it hardly felt like you were walking uphill at all. The only off putting thing was the occasional wide open swath of snow can be an avalanche hazard at times, and some weird animal noises in the dark, it's source a cause of much debate as we sauntered up the endless switchbacks.  Mr. Bastard thinks they may have been canine, I think the sounds could have been from deer. At any rate, we were not buried alive or mauled on our hike up so I will count that as a raving success. 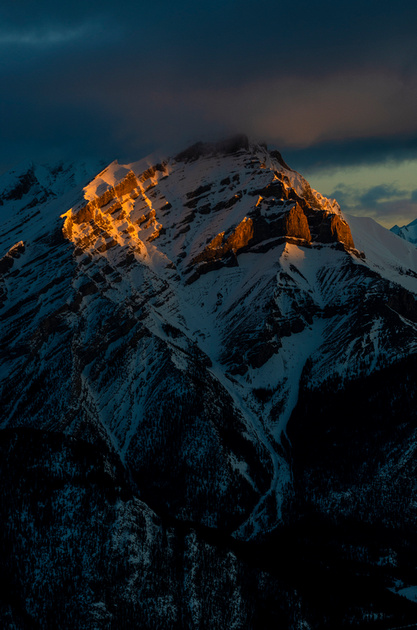 Just before dawn we popped out of the trees and next to the Sulphur Mountain gondola and restaurant, a funny thing to see after hiking for so long. We changed in to some dry layers, added some more warm clothes and then scurried around the building towards the viewpoint.  Mr. Bastard took his time to read the signs along the way, but I was almost sprinting up the stairs ahead of him.

Eventually, Mr. Bastard caught up to me and i's a good thing he did so could have an extra set of eyes with me, having never been there before I was at an absolute loss for where to set up my camera. I had no preconceived ideas of what I wanted to accomplish, no idea where the best vantage points would be and only a vague idea of what the light would do when the sun rose.  Apparently I was madly unprepared for the fact that I had about 240 degrees of good mountains and light to point my camera at, and only a few minute window to capture all of it in.  Whenever I settled in to a particular viewpoint, Mr. Bastard would be there to remind me to look behind me, and sure enough I would let out an excited holler, finish the exposure I was working on and then frantically set my camera up in another location. 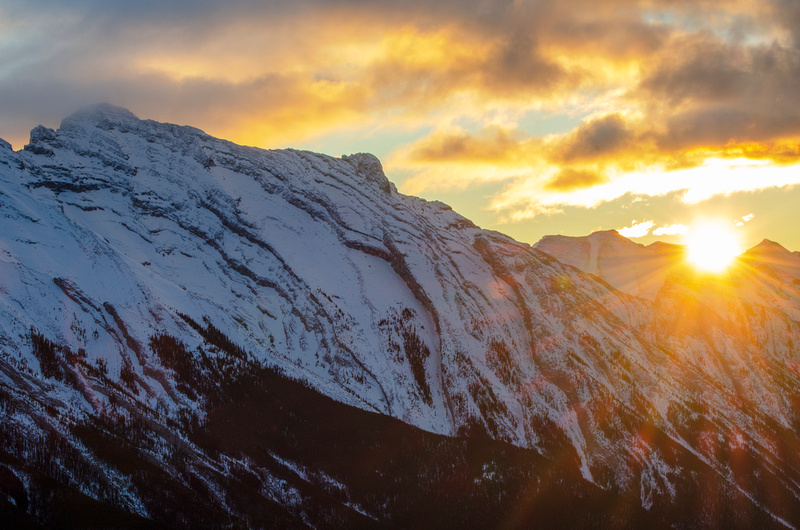 Fortunately, I had scored a bit of beta from a coworker who had been to the area the previous summer and showed me some cell phone photos, I had determined that I should bring a second camera body and my telephoto lens along with my normal wide angle set up.  It was worth carrying the extra weight, so that I did not have to waste time switching lenses, besides I actually like the telephoto shots more than the wide angle view.

As the sunrise faded in to daylight, we retreated to a sheltered place to eat breakfast birthday cake and sip on mimosas while we waited for the Gondolas to begin running for the day.  After I was full of cake and champagne, I was spoiled to the easiest descent from a summit I've ever done as we floated down the slope in the gondola, our faces glued to the windows half wishing every summit had this sort of access but mostly glad they don't. 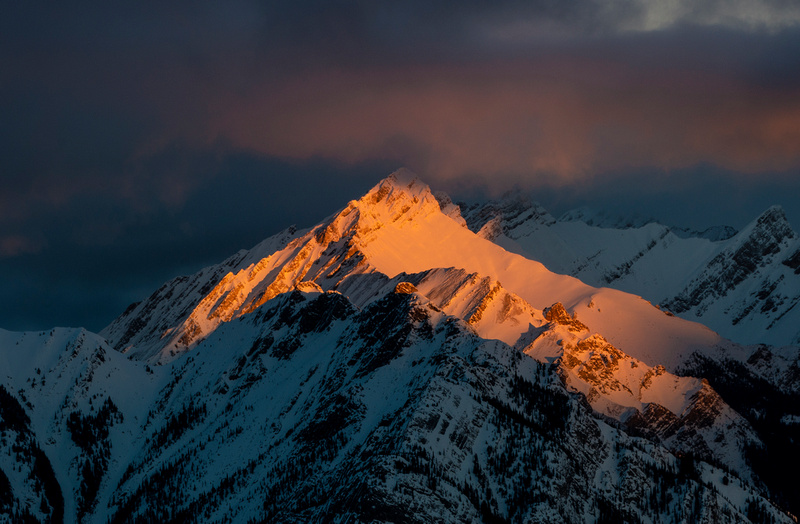