I have been called a lot of names in my life, and "late for dinner" is most certainly among them, so when my eyes shot open in the middle of the night, the familiar sinking feeling of "I'm late" wasn't really a surprise.  I fumbled around in the dark checking various clocks, and triangulated what real world time was, usually the difference of 10-40 minutes depending on how aggressive I was in blindly forwarding my clocks the night before.  A method I developed over the years to always keep myself guessing as to the real time in order to avoid being late, clearly it was working out well for me.

As usual my plan was to be well into a hike, but as per my modus operandi, by the time I had anticipated starting on the trail I had barely pulled on a pair of slippers, shuffled out of the bedroom and made my way toward the kitchen. The coffee pot suddenly a more enticing objective than a cold and windy summit. As I stood by the coffee pot, watching the slow drip of life giving nectar falling into my waiting cup, I began to formulate a back-up plan, calculating driving time and distance to various scenes logged in to the back of my mind and cross checked with a handful of calendars noting the position of the sun at any given moment. I considered atmospheric conditions, I reminisced about past success and failures. I daydreamed of hundreds of kilometres of rock and ice under my boots while I stood in the glow of a dim kitchen light, my worn out slippers planted firmly on the vinyl planked floor.  By the time the coffee was ready and the first taste hit my lips, I hadn’t come up with a back-up plan, but I had at least come up with a direction.  I would have to play the rest of it by ear. 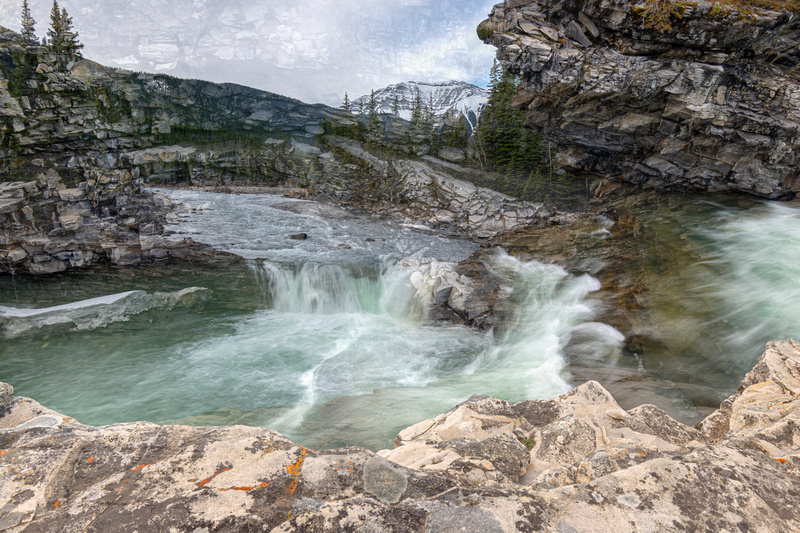 When I finally pulled the truck out of the garage the Eastern horizon had already started to turn pink, but having been late a time or two before, I knew I would usually win a race against the sun by hiding from its grasp among the front ranges of the Rockies. Sure enough, by the time I had turned off the straight prairie highway and onto the winding mountain road through the hills, the light had once again faded into a sparkling blue twilight.  I divided my attention equally between the yellow line rushing by outside the windshield and snowy mountain peaks glowing against an azure sky. With one hand firmly wrapped around a travel mug full of coffee, I navigated the familiar stretch of highway while I contemplated a place to pull over and trade coffee for a camera.  Sure, there were the old standby locations, places that consistently give ample opportunities for inspiration, but why play it safe?

I took a chance and pulled into a parking lot that I had never been before, my tires left the only tracks in the snow.  Clearly this was not a popular location, and I greedily imagined stumbling onto a secret photo location. I donned my photographers outfit, head to toe layers upon layers of warm clothing, a sturdy pair of weathered old boots and an oversized back pack full of lenses, cameras, tripods and anything else I could hastily stuff inside before rushing out the door. I looked like I was ready to spend a month in the woods, but very little in my bag would be of much use for survival, it’s more to maintain mental health. 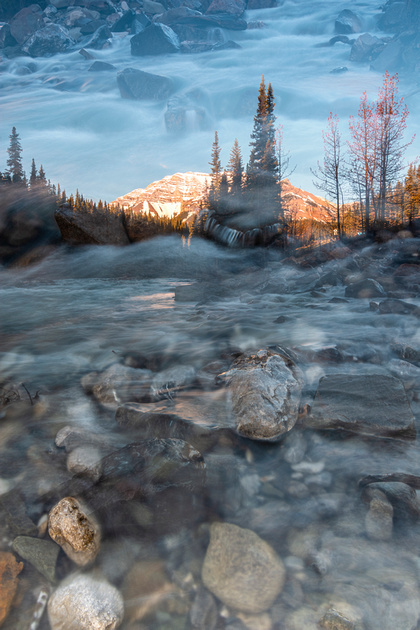 I chose a direction again, and without bothering to search for a boot beaten path through the brush, I stepped in to the forest bashing my way through snow, downed logs, prickly wild rose bushes and low hanging branches.  The forest closed in and reached toward me with every step I took until I thrashed my way into an opening, ahead of me, a small pond and creek gave me hope that the photo frame I was searching for was only steps away, but as I reached the banks of the creek, the view did not open up to reveal the picture perfect mountain scene as I had hoped. Not one to give up easily, I decided that the other side of the creek looked like it might be promising, and I made the executive decision to tromp my way across the water. 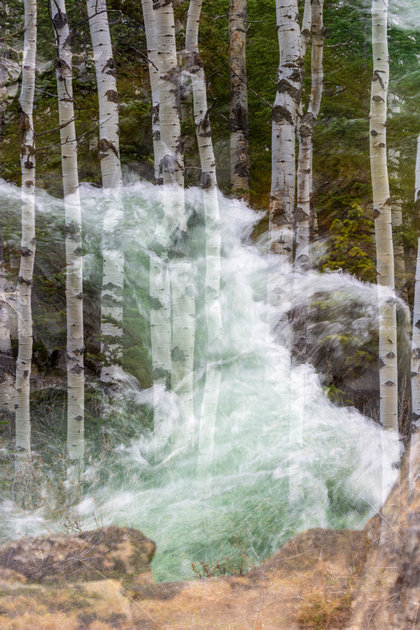 I gingerly stepped into a shallow spot and water lapped around the bottom of my boot.  The second step was just as delicate, but the water deepened with every inch I moved forward. By the time I had taken my third step, any hope I had of staying dry was lost, and my delicate approach to crossing the stream quickly morphed into an uncoordinated flailing of limbs as I slipped on algae covered river rocks and splashed through the water until I reached the bank on the other side. If my presence in the wilderness had gone unnoticed until then, it's inhabitants certainly knew I was there now. I crawled out of the creek, a bit damp but otherwise no worse for wear as long as I kept moving to stay warm.  Through the trees I could barely see a snowy summit ridge with sunlight starting to bounce off the face in a glorious blend of light and atmosphere.  I surveyed my surroundings, noting the dry brown forest, dead grass, molded old snow and surprising lack of sightlines, I decided to push forward in hopes of finding what was becoming an elusive view of the mountains. A task I did not anticipate being quite so difficult considering the general area I had chosen to wander.

Around every corner I expected the trees to open up to reveal the majesty of the Rockies, but every game trail I chose only lead to another tangle of branches grabbing at my face, a nagging worry of ticks and the sinking realization that I was most certainly going to miss out on the sunrise while wandering aimlessly through the forest. I bashed my way through soggy forest floor, snowdrifts and branches for a solid 45 minutes on the hunt for an inspiring new photo location, while the sky above me turned from blue, to a brilliant pink and then faded to daylight.  The early morning directional light blasting towards the landscape could only be seen in my imagination, and after an hour of bushwhacking I admitted defeat and began plodding down the long maze of game trails back toward the parking lot. Having not even touched the camera gear in my backpack, I giggled at the fact that I had woken up at 4 am to embark on a mere scouting mission, an activity generally reserved for mid afternoon hikes with the dog, yet I still felt satisfied. An early morning spent among towering trees, listening to the gentle meander of a creek is just as rejuvenating as a postcard view and the click of a camera. 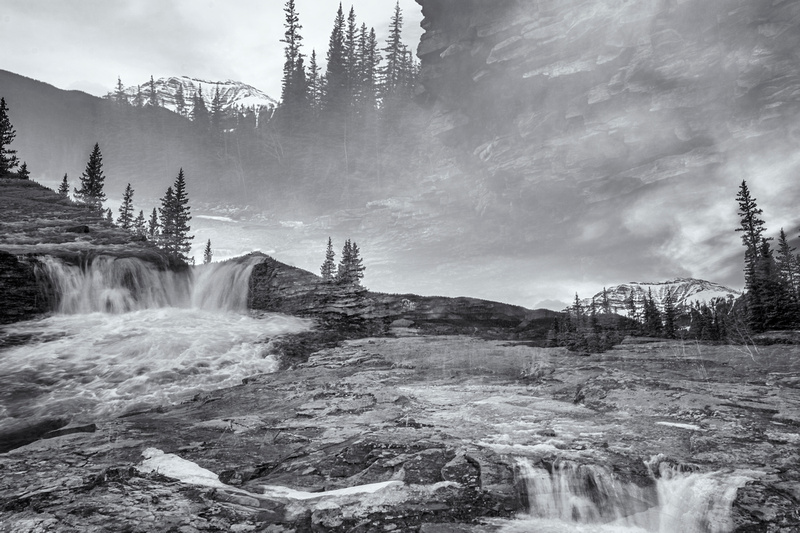