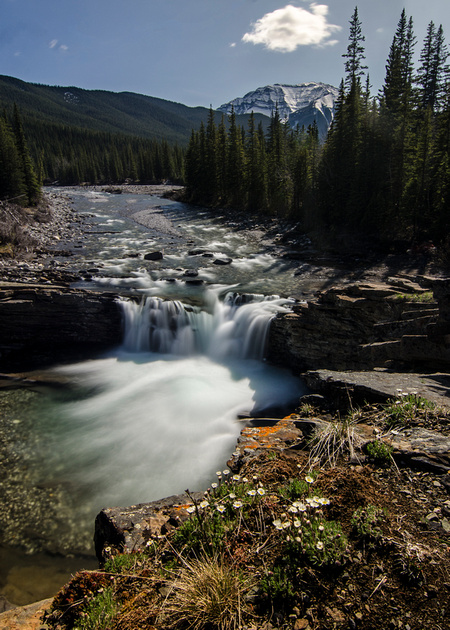 Day Three of the May Long weekend included a rather sore Mr. Bastard, who had been practicing his Mad Max style jumps from one moving vehicle to another all weekend.  I hear stories that it's harder than it looks and so our plan for an afternoon hike was amended to a leisurely drive with minimal walking.  Again, wanting to keep a bit of gas money in our pockets so we could get to work all week (always spoiling the fun) our options were a bit limited.  We could drive out to Elbow Falls for the millionth time or we could take a chance and find somewhere new.  We opted to go somewhere new.

I am embarrassed to admit this, but I had never been to the portion of Kananaskis Country straight West of Turner Valley before. I thought the area was comprised solely of pump jacks and ranch lands, the idea that there could be mountains and wild animals and waterfalls tucked in behind the hills didn't even cross my mind.  I wasn't completely off, our travels were briefly halted while cowboys (real ones, on horses and everything)  drove a herd of cattle across the highway.

We toodled around, turning down every road we came across, just to see what was around there until we finally stopped at the Indian Oils area.  "Let's just take a quick peek down this trail, we won't take long" I said, while strapping on my camera bag. "Look, it's a nice, open, gently graded path, it won't be too hard on your hurt leg" and I convinced  Mikey to hobble away from the comfort of the jeep.

It didn't take long before we reached the Sheep River and I found myself face down, uncomfortably photographing a flower growing out of the rocks "I just want to take some sample pics so I remember to come back when the light is good" I mumbled to Mikey.  An elderly couple slowly meandered by, pointing and laughing at the contorted photographer lying at their feet. I flashed a grin at them, quite conscious of how stupid I looked but not willing to leave the camera in an attempt regain some semblance of dignity.  Meanwhile, Mikey, had taken Creepy-dog up the river in order to distance himself from the weird middle aged lady squirming around the rocks. 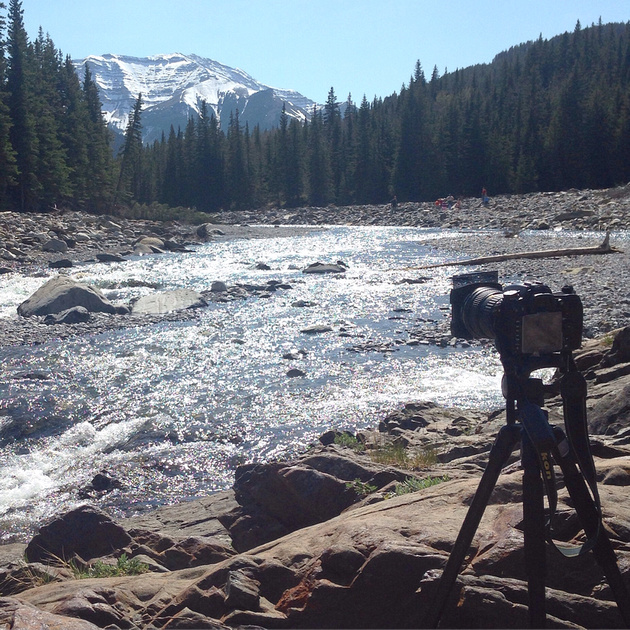 After I snapped a few shots, I sprinted and joined Mr. Bastard and Creepy-dog up the river bank some distance away.  Limping, Mikey was ready to go back to the car.  I agreed, but I just had to see what was up ahead around the corner. “ I just want to see if there’s a better vantage point to get a picture of that mountain at sunrise, and then I’ll run right back, I won't even take the camera out”  I said as I took Creepster’s leash and began hopping along the rocks, I looked back to see Mikey hobbling towards us.

With Mikey already on his way over, it didn’t take long before I had unpacked my camera bag to take a few more “sample shots” beside a cliff, and not long after that I looked up and saw that Mr. Bastard, being unable to resist said cliff, had clambered to the top while Creepy, being too short to join him, lost her mind. 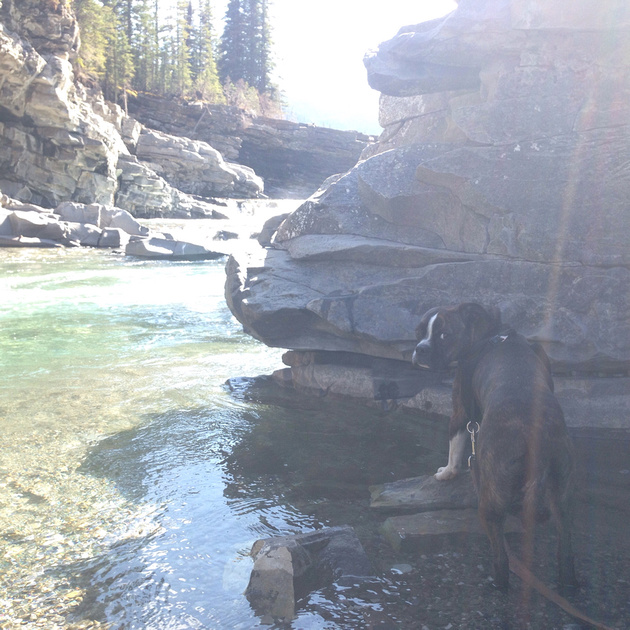 Creepy - too short to get to Dad, looks to Mom for help. Good to know where I stand.

Mikey yelled down  “Hey, you can see the falls really good from up here” Words to inspire action, the camera bag was packed again and I found myself scrambling into the forest and teetering up a steep incline trying not to let the weight of the bag tip me over backwards. I hoisted Creepy dog up to Mikey’s outstretched arms and pulled myself onto the top, belly down in the dirt again.  I looked up just in time to see the elderly couple from earlier sauntering by, looking down at me and chuckling.  (Apparently there is a nice easy trail that normal people take. Unfortunately, we are not normal people)

Mikey was right, the view of the falls was lovely and once again the bag was unpacked. Too tired to make his escape this time, Mikey impatiently rested on a rock as I rolled around in the dirt at his feet.   “Just one more shot, just one more and then we can go” I promised.  I had some rather dark filters on so each shot was quite long. I took three more to be sure. Finally, I packed my bag for the final time, but feeling a bit of separation anxiety, I immediately retrieved my cell phone camera out of a pocket.  “Mikey, let’s get someone to take our picture. Please?” Knowing it was probably the only way to get me out of there, he consented and some passersby agreed to take our picture (and then two more, just to be sure) before we finally made our way home again.  Thanks for being so patient Mikey. 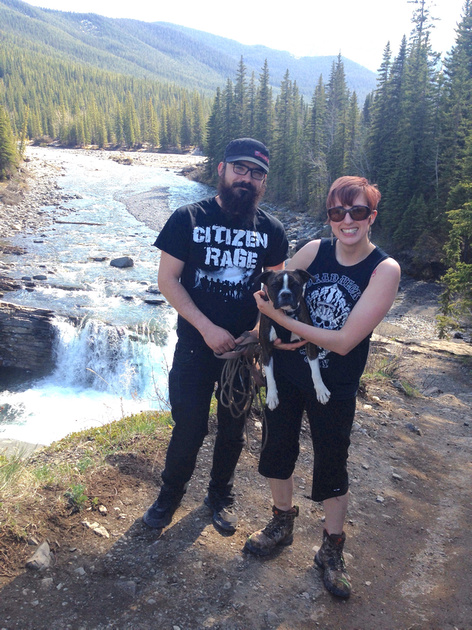