I had a very short wish list for my 31st birthday.  I wanted a hair cut, three tanks of gas and cooperative skies.

My first two wishes were granted with the help of the birthday genie (aka the almighty and powerful debit card) the skies on the other hand, could have been a little bit more gracious.

I left the city shortly after 8 pm on Friday night ready to camp out in my truck (Sir Trucks-a-Lot, I like big trucks and I cannot lie) for the weekend. A new to me Nissan Titan with the most wonderful interior storage I could ask for. Camping stove in the map pocket, lighter and toothbrush on the dash board and a little bed set up in the back seat.   I even had a weekend's worth of food stashed in the centre console furthering my suspicions that I may actually be a squirrel.

Ready for anything I set out towards the Drumheller hoodoos, a location I feel holds so much potential for great photos whenever I'm not around.  As I had expected, the skies were cloudy when I arrived and I opted for Plan B - I'd settle in for a few hours sleep and wake up with enough time to a) shoot the hoodoos if the skies miraculously cleared and b) still make it to my next location in time for sunrise. 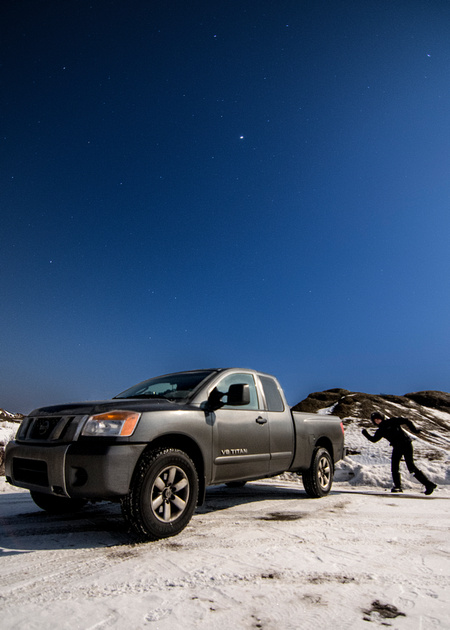 3 am and the multiple alarm clocks started to ring.  I had been dreaming of breaking and entering a hydro-dam and was thoroughly confused when I was no longer encased in a cement box once I opened my eyes.  Despite the open window, moisture had coated the interior of the truck and I wiped it away to stare out at the clear sky.  The clouds had dissipated and a smattering of stars lie above me, I almost grumbled at my good fortune. It would have been so much easier to just go back to sleep. I boiled some water, added 3 generous spoonfuls of instant coffee and walked across the parking lot to quickly snap a few photos and then hit the road. 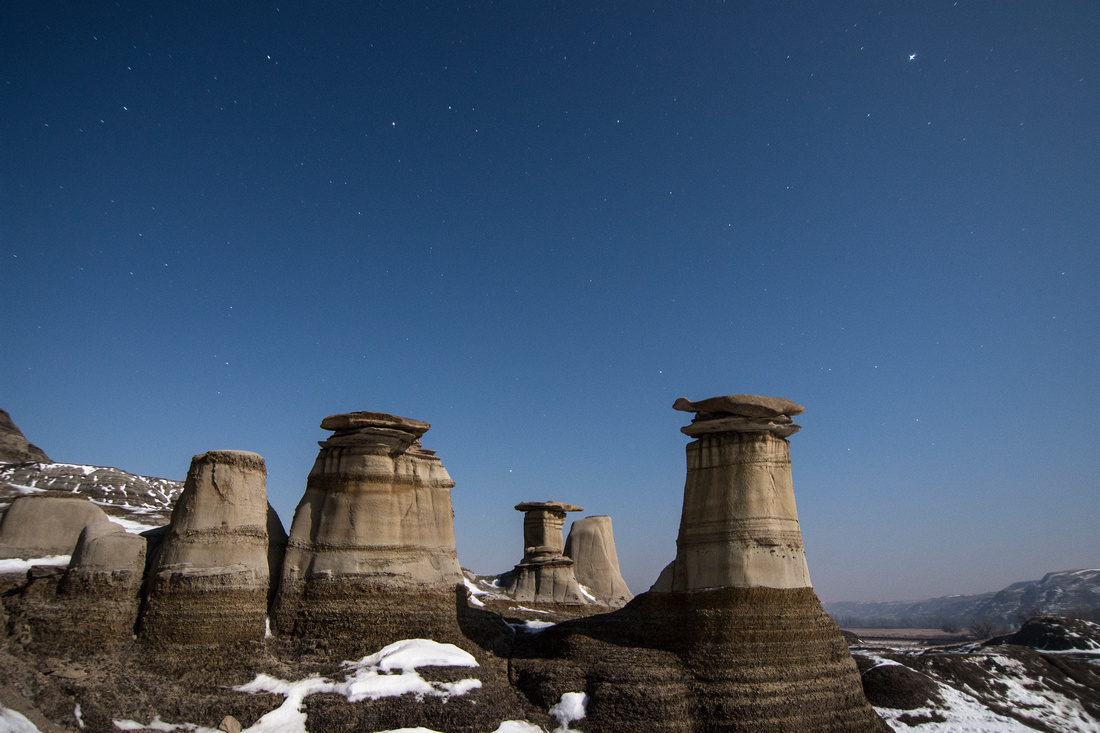 The coffee I had concocted was strong enough to induce the worst caffeine jitters of my life as I twitched farther South and East across the province than I have ever been before. My legs jerked violently and I tried to dance away the energy but the coffee had been too strong, but not strong enough for me to skip another 40 minute nap along the Trans Canada Highway. I woke feeling groggy yet opted to forego another cup of coffee, there was no need - the sky was starting to lighten and it invoked a sense of urgency as I passed through the sleeping city of Medicine Hat and veered West again to reach my destination. Red Rock Coulee had been on my "to shoot" list for ages and I happily scampered into the hills to snap photos as the sun breached the horizon. 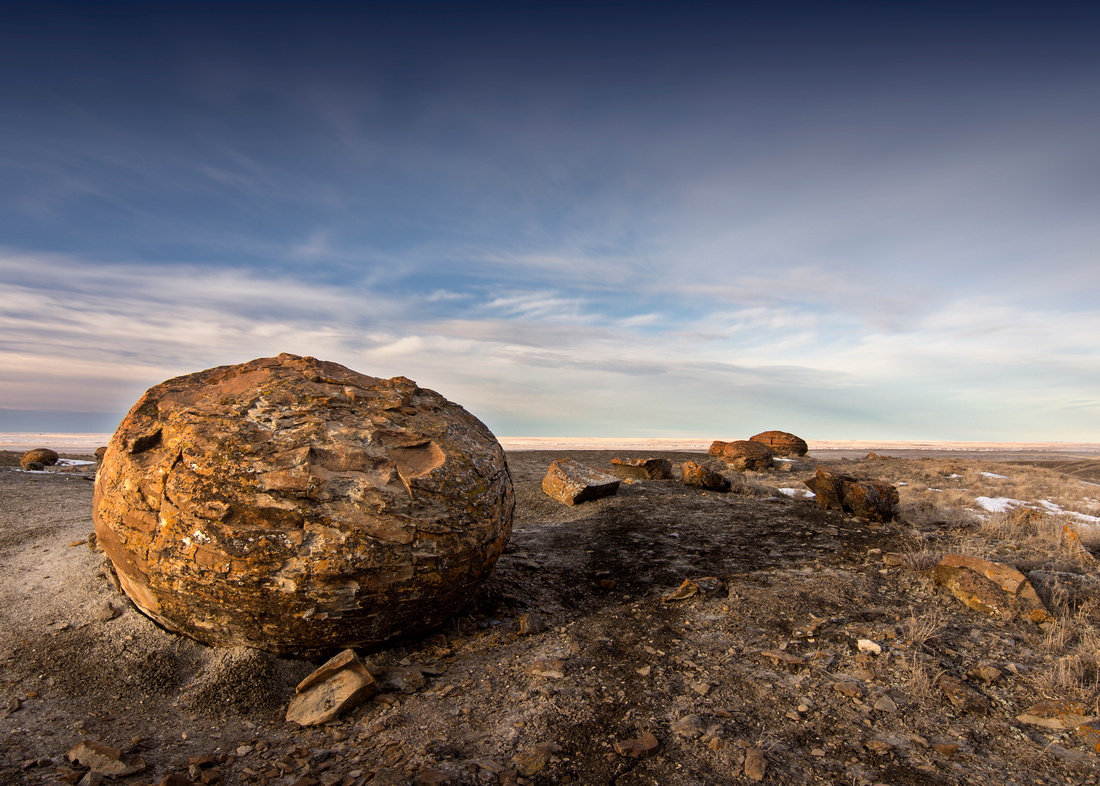 Once the sun was up, I napped again.  It was starting to be the theme of the weekend.

A few hours later I woke up groggy, wiping the sleep from my eyes and the sweat from my brow. The warm sun had made the interior of the truck quite toasty and I lazed around snacking on a can of soup and formulating some kind of a plan. I had originally assumed that I would stick around all day and wait for the sunset, but with 5 hours to kill I opted to go for a drive and see what kind of secrets the prairies were keeping. I turned into the quaint town of Etzikom to check out their fine collection of windmills and was disappointed to see that the museum was closed for the winter. Long ago, I had considered the location a good potential for sunrise photos, but now I think it will have to be a summer time location.

I continued driving, surprised at the vast amount nothing that I came across as miles of stark fields and grasslands stretched before me dotted only with the very occasional farm.  ​I kept my eyes peeled for ancient homesteads and found a few, but none looked like they would welcome trespassers, even ones armed only with cameras.  The resurgence of popularity in distressed wood for everything from picture frames to kitchen tables have left these old sentinels at the mercy of thieves, harvesting the old boards for an easy profit.  I came across a single old home caving in on itself by the highway and took it's proximity to the road as an invitation to step out of the truck and photograph it.  Gingerly peeking my head inside the door and revelling in the perfectly placed beam of sunlight illuminating what was left of an old chair, I thought a fellow photographer must have been there before me to line up the prop so perfectly but the muddy footprints left by coyotes across the weather beaten living room floor were the only sign of life. 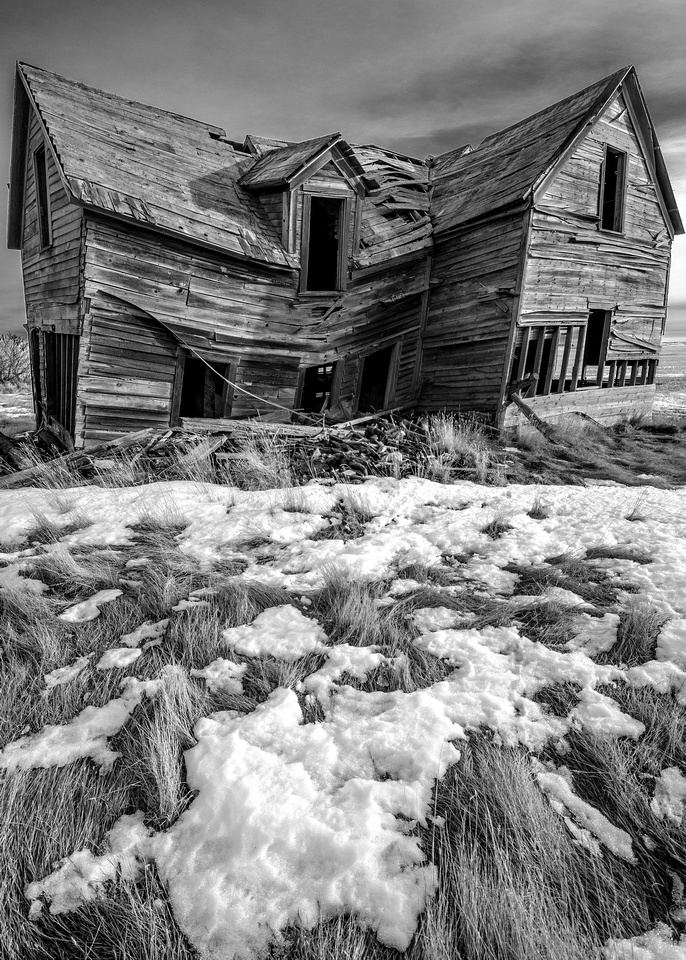 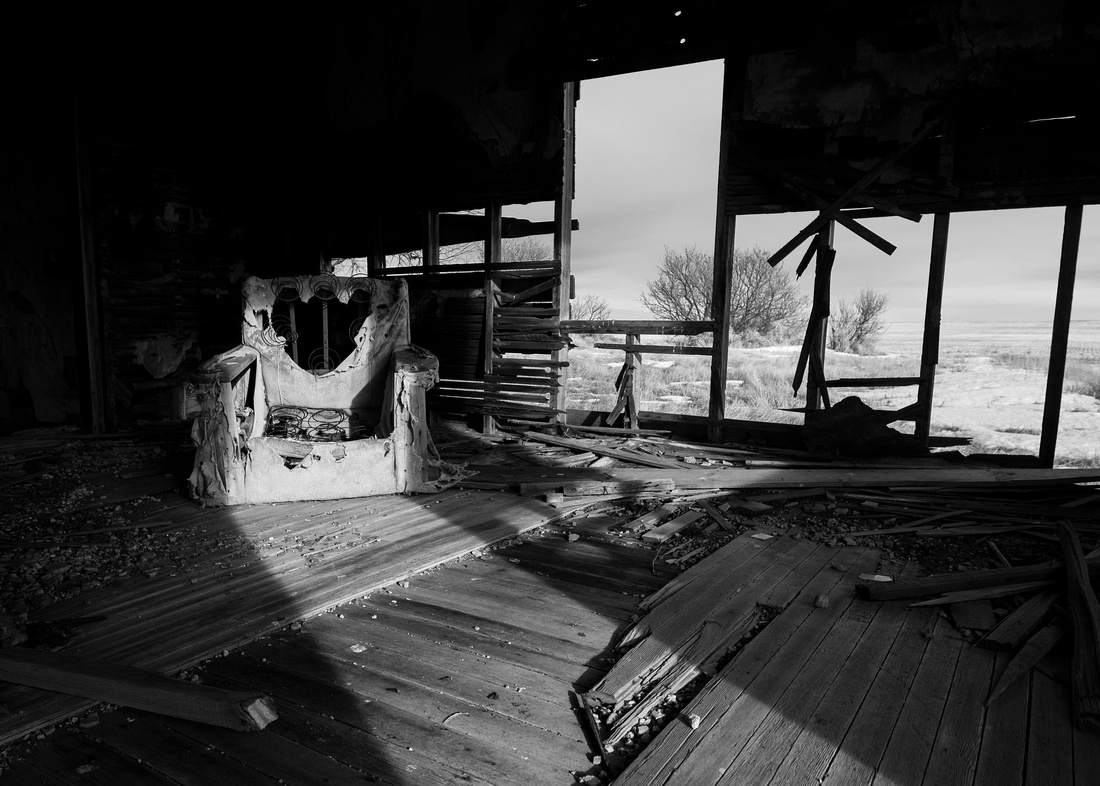 Returning back to the coulee, I snacked on chips and enjoyed a beer pausing to snap a few photos during an incredibly lacklustre sunset. The grey and dreary landscape held out on me and I was thankful the sunrise had secured at least a few photos.  By 5:30 pm I was back in the sleeping bag, hoping to wake up to clear skies in order to photograph the stars but a mere 2 hours later I woke to a familiar noise.  The wind whistling around the truck carried the song of a snowstorm, strange how I immediately recognized the sound. A quick check of the weather forecast on my cell phone confirmed what I already knew, and I abandoned hope of a starry night to photograph.

I opted to head home a day early rather than fighting 300 km of snowy highway after another restless night.  I was disappointed about cutting the trip short, but by the time I was 100 km out of Calgary, the snow had already begun accumulating and the rear end of the truck fishtailed with every depression of the accelerator. I knew I had saved myself 200 km of precarious driving and I was placated knowing that I will likely make the coulee an oft visited location over the next few years.   Once I was home, I collapsed into bed for a glorious 13 hours of continuous sleep.  Party. Animal.