I recently celebrated my 30th birthday a few weeks back and months before Mr. Bastard had booked a weekend stay in a cabin nestled underneath the impressive Castle Mountain in Banff National Park to celebrate.  The plan that he would hunker down in the cabin and let me have a weekend with my camera was a pretty sweet one and I was looking forward to. It was a good idea in theory, but a few weeks back I was in the throes of some rather hilarious but life interrupting vestibular issues which led to some compromises from both of us.

I think deep down Mikey already knew the answer when he asked what I wanted to do on Saturday morning.  He was probably hoping that because I couldn't walk in a straight line to save my life, or sit in a car without feeling like I was piloting a space ship, that I would be happy to stay close to the cabin, but that's never the case when my camera is close by.  I decided to take the 2 hour head start afforded to us by staying the night outside of the city, to go just a little bit further into the mountains for sunrise than I can normally make it.  Because it was my birthday, and I couldn't drive, Mikey got to wake up at 4am to chauffeur me through freezing rain and snow to Waterfowl Lake to make sure the sun came up. (Lucky him!) The sun indeed rose as it said it would and I clumsily photographed  the mountains while trying my best not to tip over sideways, relying on the tripod for balance.

The next morning, there was no convincing Mr. Bastard to ruin a perfectly good Sunday morning by waking up earlier than we're known to go to sleep on the weekends and tackling another sunrise scene, so I decided I would walk down the road from the cabins to an old standby location.  The river next to the highway and under Castle Mountain has proven to be a good location time and again for many a photographer, and it was the best that I would be able to reach that morning.  The proximity to the cabins was a real treat as I woke up, showered, cooked myself some breakfast and bundled up with plenty of time to spare.

I stumbled and staggered and swayed and swaggered my way down the road, crashing into snowbanks and giggling at the irrational footprints I left in the snow. I made it to the river, surprised to see the ice and snow had significantly melted over the last day, and plunked myself down on a bit of ice and waited for the sun to arrive.  Rain gently fell out of the sky and the ice that was piled up on the banks of the Bow slowly melted out from underneath me leaving me kneeling in a steadily flowing stream melt water.  It was a nice quiet morning and I was happy to begin the next decade of my life so peacefully.  I had the place all to myself for a few hours, but by 9 am I was freezing cold, soaking wet and it would soon be time to check out of the cabin.  Later, I grinned as we drove away at noon, and saw the crowd of photographers in the same location I'd had to myself all morning. They had all missed the best part of the show. 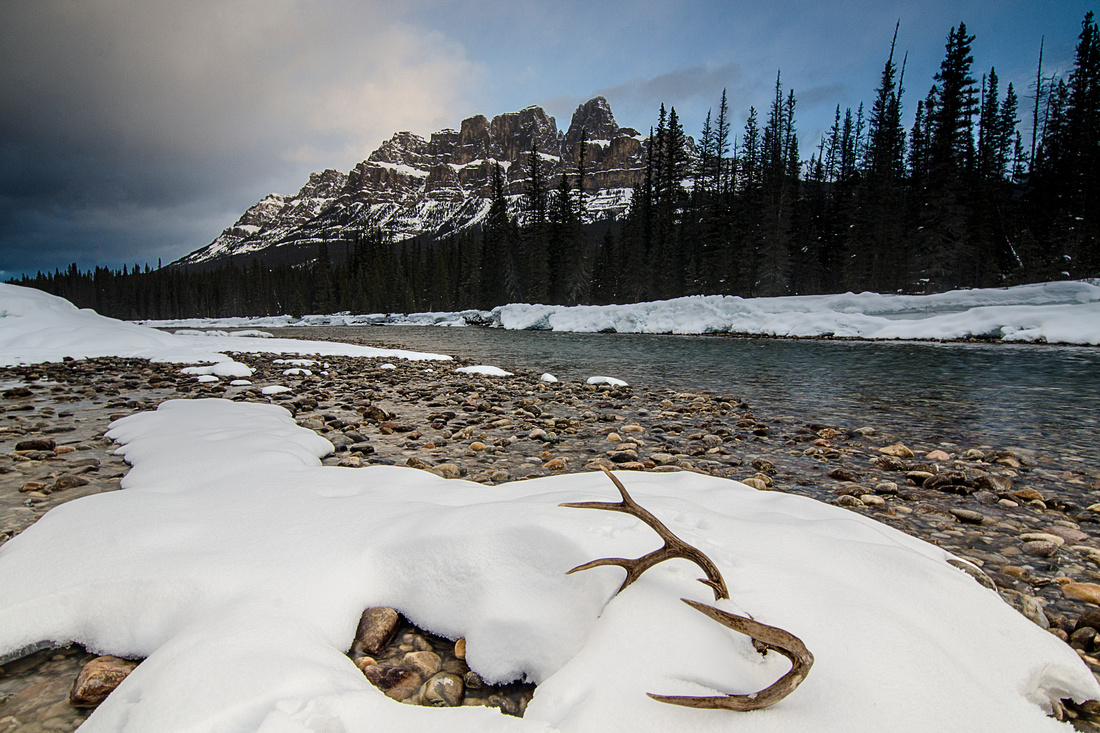 Llisa Bastard Photography
It's usually a challenge to wake up and I curse myself for having such a ridiculous hobby, but then when the light travels down a mountain face and the valley turns pink it's such a perfect moment. My adrenaline starts going and I forget how tired I am.
You should see for yourself. I think everyone should whether they're a photographer or not. In the summertime it's easier to just stay up all night and wait
Dave(non-registered)
Great light in that first one. I sure hope you start getting better soon. You are inspiring me to try and become a early morning photographer.
No comments posted.
Loading...
Subscribe
RSS
Recent Posts
Coffee Grounds and Security Blankets Banff Sunrise up High Cold, Dark and Scary Scouting Sgt. Peanut - A (Mostly) True Story Looking Back on 2019 Where in the World is Llisa Bastard- Roving Exhibition 2018 Favourites Minnestimma Lakes
Keywords
Photography Alberta Landscape Calgary Punk Failure Metal Sunrise Winter Banff
Archive
January February March April May June July August September October November December
© Llisa Bastard Photography
Powered by ZENFOLIO User Agreement
Cancel
Continue