I uploaded a new photo to my Iceland gallery this week.  Well, not exactly new, it's over a year old now, but new for the public eye.

I was sure bummed out when I came home from vacation last year and viewed the photo on my big computer screen.  Water droplets everywhere. I had packed lens tissues, but the flimsy little papers just couldn't keep up with the torrent of water and mist spraying from the waterfalls.  The moment I laid eyes on this particular waterfall, I knew I had to photograph it, despite stopping at close to a dozen other equally impressive waterfalls over the course of the previous three days.  Tired and aching from a long day, the car pulled over and both my Dad and Mr. Bastard entertained themselves while I waded around in the river trying to hold the tripod steady against the current. I captured the composition I wanted and took an extra photo with a longer lens before I hopped into the car just to be sure, and away we went again.

The photo with the long lens made it into the gallery in the first batch. It wasn't my favourite, but it was the only one that I considered a success from that particular stop. There's nothing wrong with it, but I knew what else I had tried to capture that day and I knew that I had failed. It didn't help that every time I watched The Secret Life of Walter Mitty (which is a LOT) I would spot the scenic little spot as Ben Stiller's stunt double careened past on a long board.  There's that waterfall again.  Thanks a lot for reminding me Walter. 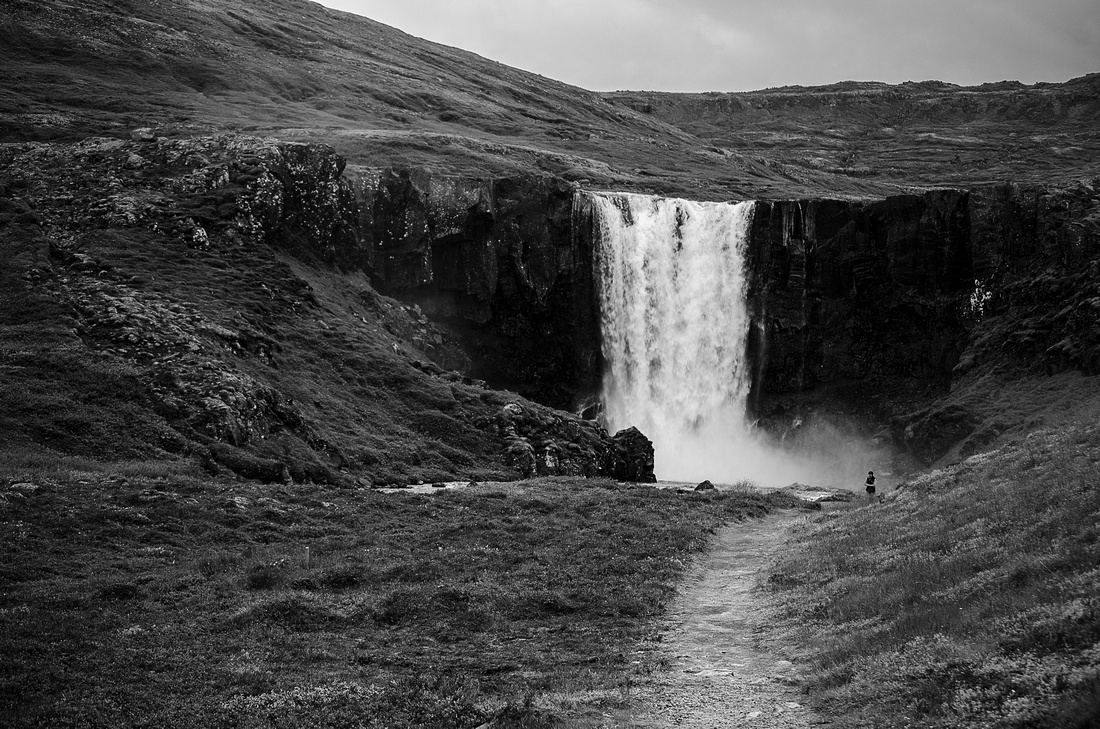 The rejected photo sat on my hard drive as a reminder to bring a towel next time and to slow down, something I have struggled with my entire life.  I rushed through, I didn't look carefully enough at the lens when I cleaned it, I didn't examine the LCD rendering closely. I packed up and left before I was certain I had met my expectations.  It was an expensive mistake and I hated the photo for reminding me.  But something changed over the course of the year, and it wasn't the photo, which had patiently waited on my hard drive to be recognized. It was me.  Somewhere over the course of the last year, I had stopped berating myself for screwing up and started to kinda think that maybe the photo might be sorta okay in it's own way.  Instead of dwelling on my failure to achieve my original vision for the photo, I was able to work with the photo I had. A conversion to black and white, some adjustments to emphasize the water droplets rather than trying to hide them, and I was finally able to view the photo with fresh eyes.

A towel, is about the most massively useful thing an interstellar hitchhiker can have. The same holds true for photographers.Some hard lessons were learned in Iceland last summer.

Sometimes it just take a little bit of time and a few steps back from a photo to realize it's potential.  I do occasionally troll through my archives to find a photo which I may have written off before giving it a proper chance.  So don't press the delete button on your reject pile immediately, because even though they may not meet your expectations right away, occasionally they prove themselves in different ways after the dust has settled.