Tossing and turning until well after midnight, I can't say I was all that surprised that I slept through my 2 am alarm clock, still, I was a bit disappointed in myself.  Mr. Bastard had gone to Saskatoon the day before and I was looking forward to spending the day in the mountains.  I dragged myself out of bed, 7 am, too damn early for a Saturday and yet still too late to catch any of the good light.  These weekends go by so fast, I feel guilty when I waste a perfectly good opportunity to go photograph things.  I slunk toward the kitchen, warmed a cup of day old coffee in the microwave and then collapsed onto the couch.  I didn't quite feel sick, but I sure didn't feel well either. A mere flight of stairs had already felt like too much effort and I decided I would need to formulate a new plan that was a bit more gentle on the body than the intensive two day sunrise chasing photo frenzy I had hoped for. 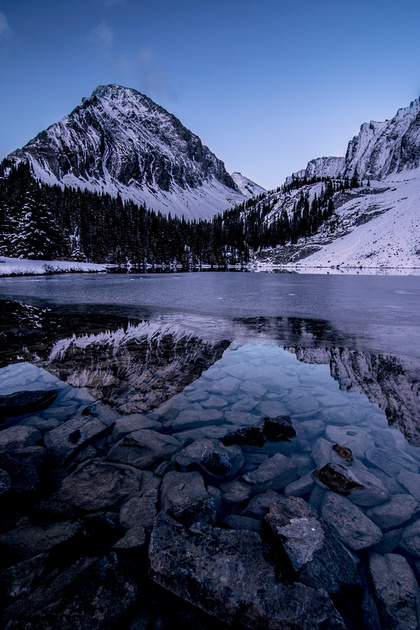 I mulled over my options. I'd heard about something similar to the sunrise phenomenon that might also afford good photographic opportunities, and then it dawned on me.

Of course!
It had all the qualifications I was looking for: golden light, reasonable hours of operation and I could even make up for the missed sunrise.  I did some calculations in my head, sunset at 6:30 pm minus one hour fifty four minutes driving and 5 km hiking equals I have to leave the house at 2:30 pm. So I left promptly at 2:30 and arrived at the trail head deep in the mountains two hours later, already six minutes behind schedule.  Sunset, with it's reasonable hours,  had one drawback as I grumbled about the amount of traffic I'd encountered.  I wasted no time and began lacing up my boots when I noticed a peculiar sound emanating from the rear of the jeep.

The tire was losing air at a rapid rate and I didn't have a spare.

I dug around in the jeep for a pen and scrap piece of paper and scribbled out some instructions and a phone number.

Maybe sunset with its reasonable hours, wasn’t so bad, I thought, as a young couple wandered out of the forest right on cue. “Excuse me” I asked “Are you returning to civilisation?”  The couple stared at me. I remembered we were in a parking lot, in the woods and the parking lot was nearly deserted. I tried to smile and curled my mouth upwards in the least axe murdery way I could. “Civilisation, are you headed to town? I have a flat tire, can you text my husband for me?” The couple inspected my flat tire with pitying looks and readily took the piece of paper I scribbled on. Mikey was on his way home from Saskatoon last I’d heard, it would be  a few hours before he got my message. I thanked the couple and then started up the trail.

The whole sunset business had quickly gained another point, hiking alone in the day light is significantly less terrifying than hiking in the dark and I marvelled at the scenery around me. Birds chirped in the trees and I welcomed the sound rather than freezing in terror wondering what that noise was. The mountains soon appeared over the tops of the trees as I gained elevation and I resisted the urge to stop and photograph them, I knew that the view would keep getting better if I kept on. I reached the meadows before the lake as the sky began to glow a brilliant gold, and that’s when I noticed the bear in the distance.

I stopped dead in my tracks. The bear stopped grazing and turned towards me. We stared at each other across the meadows, sizing up the situation, frozen, neither of us quite sure what to do.  My heart beat at a million miles a minute, its times like this I hate hiking alone.  I debated with myself. Should I leave? Should I keep going?  I’m safe now, but what if it wanders closer to the trail while I’m at the lake?  I clutched the bear spray in my hand, my eyes darting between the golden light and the bear, between certain photographic opportunities and possible maybe certain death.  It was a tough choice until I noticed a gleam of white reflecting in the sun. Antlers.  It was only a moose-bear, more commonly known as a moose that only looks like a bear from far away to the paranoid hiker.  I relaxed a little bit and scurried towards the lake.

Moose-bears, flat tires and traffic notwithstanding, I had timed the trip a little bit too perfectly. Driving time and hiking time were well accounted for, and I arrived at sunset as I had planned.  What I forgot to account for was the absolute chaos that broke out once I arrived at the lake. Layers I had shed on the way needed to be put back on, right side out. The boots came off and then had to be put back on and re-laced.  My camera bodies had no batteries, no memory cards and no lenses attached and the assembly was a little difficult with my cold fingers. My tripod, nearly frozen shut, required coaxing to open and then there was the issue of a composition.

I’ve grown accustomed to having some sort of a plan in place when I take photos, but having never laid eyes on Chester Lake before I had no idea what to expect. I had no plan for this place and it showed. I ran across a bridge with my gear in tow and immediately negated having used the bridge at all when I splashed into the outflow creek, nearly slipping on the algae covered rocks.  I set up a camera squarely in the middle of the creek and then promptly decided to switch lenses for each camera. I juggled all the gear precariously, somehow rescuing the leaning camera laden tripod without spilling an armload of lenses into the water. My backpack laid in the snow nearby vomited assorted accessories. I was uneasy about being alone, but entirely pleased that I had the place to myself.  Chaos doesn’t like an audience. 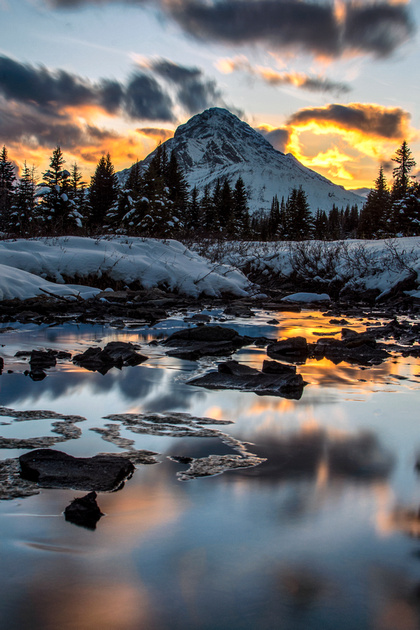 Finally, after a multitude of lens changes and filter swaps, I got into a system and snapped long exposures with one camera while using the other camera to shoot some telephoto photos in the opposite direction.  I finished one last long exposure and, seeing the swath of sunlight bathing the mountain face in a pastel pink wash, decided I’d need yet another lens swap and a slightly different composition for that particular shot.  I stuffed as much of the gear into the backpack, shouldered the tripod and carefully tiptoed across the creek once more.  I sprinted up the bank of the creek, threw the backpack in another pile of snow, plunked down the tripod, swapped lenses, readjusted the composition, removed a filter, readied the camera to take a photo, placed another filter back on and pressed the shutter just in time to see the last of the light leave the mountain face.

I bloody missed it.

I couldn’t believe it.

I stared around me in disbelief half expecting the sunlight to reappear but it was gone. 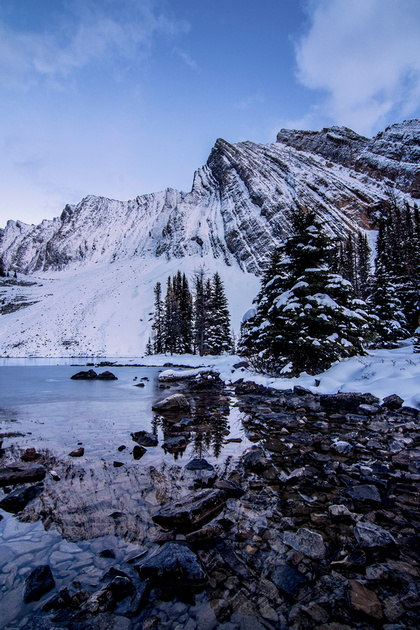 I shook my head at the thought of coming all this way just to miss out by mere seconds.  I snapped a consolation photo and surly stuffed my gear into the backpack. I checked the time, sunset was definitely over and I’d been barely been at the lake for fifteen minutes.  It seems absurd to put in so much effort only to turn around fifteen minutes later.  At least I’d been shooting with two separate cameras, so it was sort of like I was there for half an hour.  By my calculations, I would have just enough time to hike back to the trail head and cook a bit of dinner before Mr. Bastard came to help deal with the flat tire.  I stepped back onto the trail in the quickly darkening forest and hurried back towards civilisation. Once back at the immobilized jeep with a pot of snow and oatmeal slowly turning into dinner on the stove,  I studied the back of my camera screen. I felt like a fisherman coming home with the catch of the day and raving about the one that got away.