If there had been anyone near by last night, they would have heard a strange stream of consciousness emanating from the darkness. Wandering down the banks of the Kananaskis River, I needed something to shout to the world, my voice being the first line of defence against hungry bears waking from their slumber.  Unfortunately, that something was a phrase from the sitcom How I Met Your Mother that tends to pop into my head during inopportune moments such as this.  "boats! Boats! BOATS!" I shouted gingerly, half hoping a fellow photographer or hiker would appear out of the darkness to converse with in lieu of yelling this stupid phrase, the other half hoping I was the only person left on earth so nobody would hear me shout such absurdities to myself.

I was alone, joined only by the stars sparkling in the sky above and the river babbling quietly to itself, much like me. The soothing music of trickling water interrupted only by the occasional sound of snow and ice succumbing to the recent warm weather and calving into the water. I spotted a shallow area in the stream and splashed through the mere inches of water to a sizeable gravel island to begin setting up my shots. "boats! Boats! BOATS!"

With two cameras each firing and a refreshing beer in hand, I busied myself with the gear trying my best to ignore the potential danger that lie beyond the scope of my headlamp in order to enjoy the moment.  A shuffle of the scarf on the ground protecting my older camera which was precariously balanced in the sand and rocks "boats! Boats! BOATS!" I took a turn to marvel at the sky above before moving over to the camera on the tripod to tweak the composition and settings "boats! Boats! BOATS!"

The sky now enveloped in a glittery velvet robe and mountain peaks gleamed in the distance.  The world advancing in zen-like thirty second increments.  I crouched next to the tripod to frame the next shot and relished the cool water lapping over the toes of my boots.  Cool water that hadn't been there thirty seconds ago. 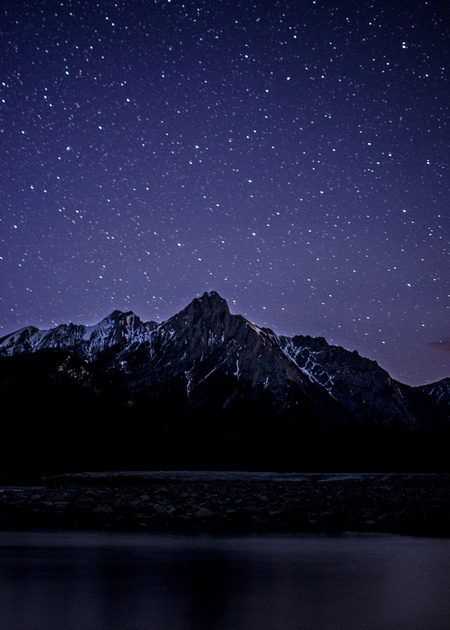 I scanned around with my flash light, my island in the stream was significantly smaller than it had been a few moments ago.  Cameras were flung into the bag mid-exposure, tripod fastened in record time and my hiking poles were in hand along with a stronger flash light in under a minute as I stepped off my patch of dirt towards the shallow location I had crossed only an hour ago.

The stream had rather suddenly transformed from the babbling brook to a proper river. I navigated through the now thigh deep black water thankful I had brought my hiking poles to help keep me upright against the current. Though the unexpected river fording was only a few metres wide, I envisioned every step being my last should I misstep and be pulled under water with my heavy winter clothes and backpack.  I made it across the river now sopping wet and with saturated winter boots so heavy I had trouble lifting my legs to get up the embankment.  Note to self: Google "leg day" 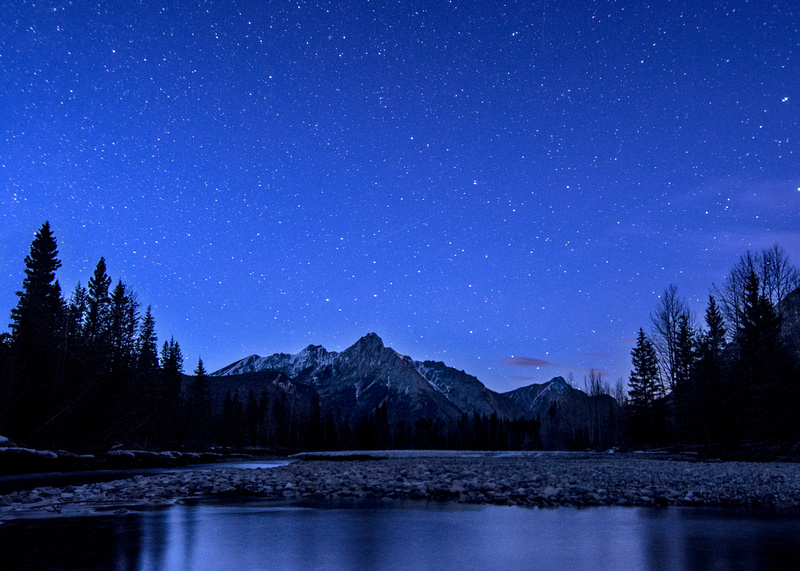 Eager to get back to my truck before the chill set in, I boats! Boats! BOATSED my way through the tangle of bushes next to the river, my tripod catching on branches illuminated by my light. I scrambled up the icy ditch to the highway and made it to my truck where I stood pantsless and sockless on the side of the road hoisting water laden boots into the bed of the truck and nervously giggling at my ordeal.

It would appear that since the Kananaskis River is dammed, levels can fluctuate quite drastically and it would be in your best interest to bring a boat! Boat! BOAT!