I've been asked to shed a bit of light on my process for shooting live bands in those dingy, terribly lit bars I love so much.  I really enjoy shooting in these conditions because it's a challenge that forces me to think on my feet, adapt to constantly changing conditions and dodge fellow concert goers all while having a beer and listening to rad music.

Because the lighting at a gig is so dynamic and unpredictable, a good knowledge of the exposure triangle is your best friend in low light, fast action settings.  I start with my aperture as wide as it will go, a shutter speed around 1/60 to 1/100 to freeze the action and ISO 1000 adjusting up to ISO 3200 or even 5000 if the situation requires.  Most often, stage lights will be brightest around the musician's face so I prefer to shoot in manual mode with spot metering on the subject's face to ensure the face has a decent exposure and let the rest of the chips fall where they may, often letting the legs or body fall into shadow.

In Photoshop or Lightroom I usually only do basic raw adjustments and leave the rest of the image alone. A typical adjustment will be to lower contrast, increase white, highlight, shadow levels and finally lower the black slider so the clothes don't look like they haven't been put through the wash a thousand times (you might notice most of the punks and metalheads I photograph tend to wear black)

The White Balance is the biggest struggle in live music photography because of the hodge podge of coloured lights to contend with.  I like to leave a bit of colour cast to the images but I typically prefer that it doesn't overpower the image unless the colour wash is particularly even throughout the image.  The way I correct the white balance is to note the original colour temperatures, click the white balance eyedropper on a white or grey portion of the scene (whites of the eyes or teeth are often a good bet) and then adjust the colour temperature sliders slightly back towards their original locations. 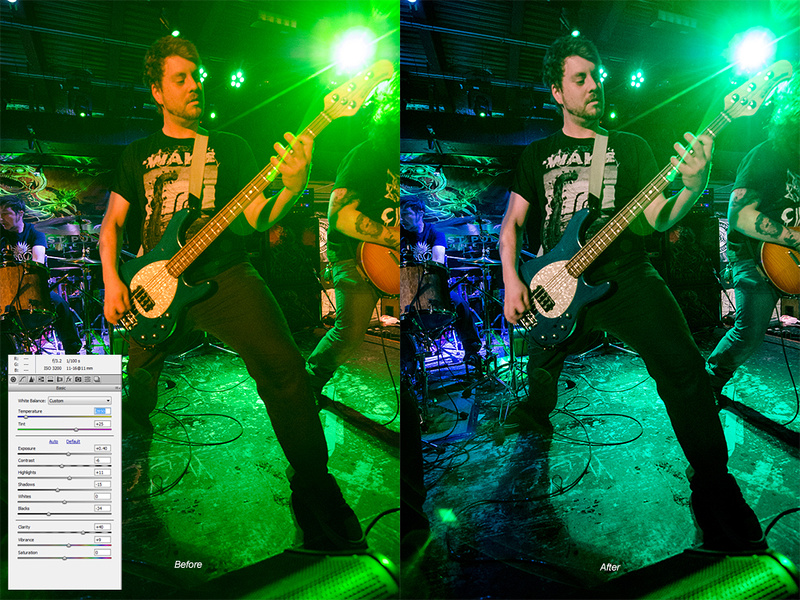 It's important to realize that your presence can have an enormous impact on the way a band will perform on stage when you're sticking a camera in their face.  Your presence will also affect how the audience will behave often choosing to protect you and your gear rather than having fun. ​Having a photographer in the room, especially one front and centre changes the dynamic of the show, often band members will perform for the camera rather than their audience and the crowd is less likely to dance and mosh around enjoying the band and will instead hang back to ensure the photographer and their gear don't get mangled.

I try to minimize my impact on both the band and audience as much as possible being mindful that it's the band's show and not a chance for the photographer to show off their sweet photography stance (My photography stance is awesome by the way, like an old school wrestler in a mini skirt, physically it looks like I can withstand a tornado without budging yet I still give the appearance of being highly unstable) With the increasing number of photographers jostling for position at local shows, often times I find myself putting the camera away altogether unless I've been specifically asked to shoot in order to minimize the number of photographers and increase the number of actual audience members.

If I need to get close to the stage for a shot I'll move in for the shot but once I have what I need I'll sneak away to the back of the room to allow the audience their space to enjoy the music.   The same goes for switching sides of the room, I try to use the back of the room as much as I can rather than walking through the front of the crowd.  Besides, the vantage point at the back of the room often allows for some fun crowd shots.

A good selection of wide and close shots of each band member as well as entire stage photos will be nice variety for the band to choose from.  It's easy enough to get a good selection of photos right off the start and then use the rest of the time  to find interesting ways to frame shots using audience members, pieces of gear, lighting etc...

The biggest pet peeve I have while I'm playing with a band on stage besides spilling a shot of jagermeister all over my strings is having a photographer come up, jam a camera in my face and blind me with a flash.  It's probably because I'm a marginally okay bass player at best and prone to short term memory loss, but camera flash can be incredibly distracting.  If you can, keep the flash off your camera unless it's absolutely 100% necessary, even better - if possible ask the band if it's okay before their set.  Be mindful of the flash blinding both the band and audience members. If I have to use flash, I prefer to set it to a very low power setting to just give a little pop of light so it's not quite so noticeable by everyone in the room.

Instead of using flash, often the lights in a venue are set to a certain rotation which, after a bit of observation, can predict when the "good light" will be available for certain shots.  Occasionally, you can even request the person behind the sound/light  board to help you out with a bit of extra white lights on stage which will be useful for easier white balance adjustments in post.

Perhaps the most important tip for photographing a live music performance though, is to remember to put the camera down once in a while and enjoy the show.

Have any of your own tips for live music?  Post them in the comments!