Out of the entire box of 64 Crayola Crayons (with built in sharpener) Emerald Green was my all time favourite crayon. It's wax left a smooth, shiny green line with every mark I made. In fact, I had made so many marks with my Emerald Green Crayon that it's paper had been torn off time and again so that the only words visible were "rald Green."  It was the best crayon. Even better than "Sky Blue" and definitely better than "Flesh" in my humble opinion. 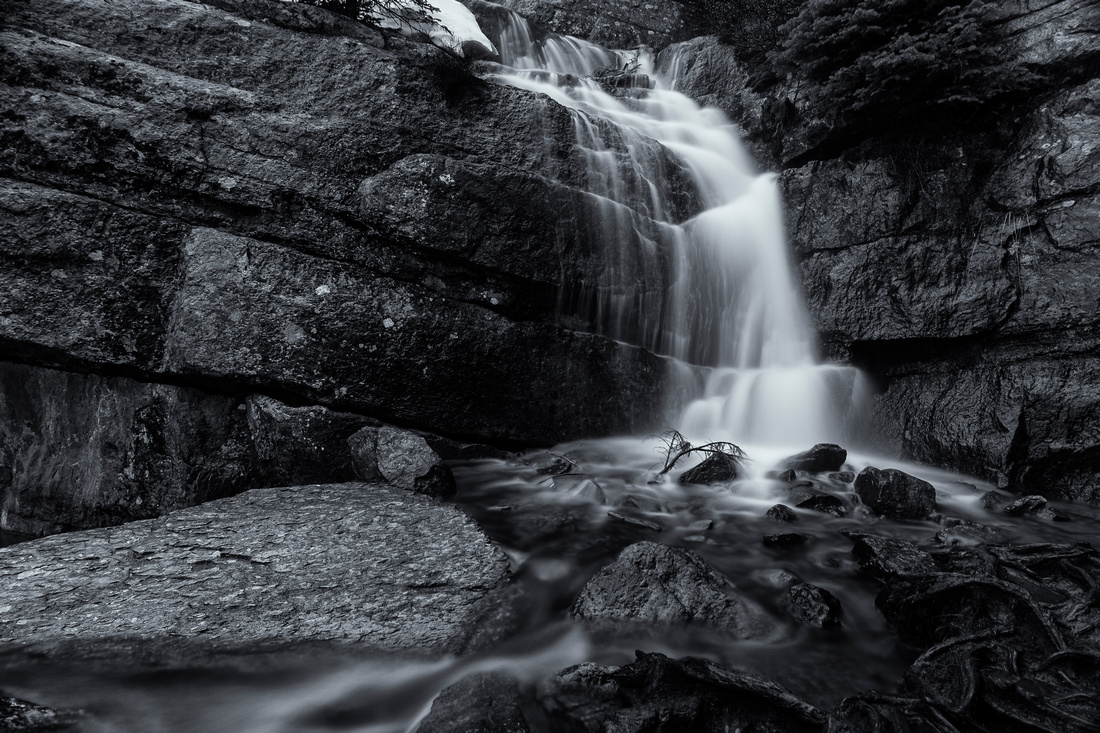 One day we were given a new assignment, and sheets of paper with a little picture on it were handed out to every student.  We were to listen to the teacher and colour in the sheet with our crayons as she instructed.

I clutched my Emerald Green crayon in my hand so as not to lose it to another wily 6 year old and handed in my paper to the teacher.  She did not look impressed, and I, being a studious little overachiever even at the ripe old age of 6, was not impressed either. I had been made out to look like a person who didn't know her colours yet and I totally knew at least 64 colours.

I have hated sharing ever since.

So when the weather forecast called for 30 apocalyptic centimetres of snow in the mountains last weekend, I took that as my cue to head to the perpetually popular Lake Louise and hike up to the Lake Agnes Tea House, thinking the weather would keep the crowds at bay.  A soggy trail is better than a crowded one, and a soggy photographer is at least marginally less grumpy than an interrupted one.  Knowing that the weather would be crummy and the sunrise non-existent, I decided to leisurely make my way to the mountains, starting with a late alarm clock at 2:30 am.  After losing and finding my umbrella twice between the house and the garage and  then opting to ditch a camera body to balance out the extra layers and coffee pot I'd packed - I finally hit the road. I gently reminded myself that the experience is more important than the resulting photos as rain pelted the wind shield, combated by the constant woosh woosh of the wipers as I headed into the mountains.

Just after coffee number three, and shortly before sunrise, I arrived in Banff.   Although my assumption that the sunrise would be lacking was shaping up to be correct, I didn't want to miss out on a perfectly good photo opportunity should it arise. I detoured slightly and positioned my camera at the ready on the shore of Two Jack Lake in case something interesting happened.

The world was drenched in a dull grey wash, but I still took a few shots of some clouds lazing around in the tree tops for good measure before continuing my journey.

In a completely unrelated and wildly off topic note, I'd like to take this moment to point out that the outhouse at the corner of Lake Louise Drive and Moraine Lake Road is THE BEST place to stop for a pee. It smells of a delightful cedar forest and never fails to justify drinking a fourth cup of coffee between Banff and Lake Louise. If you're ever in the area on a cool summer's morning, pee there. 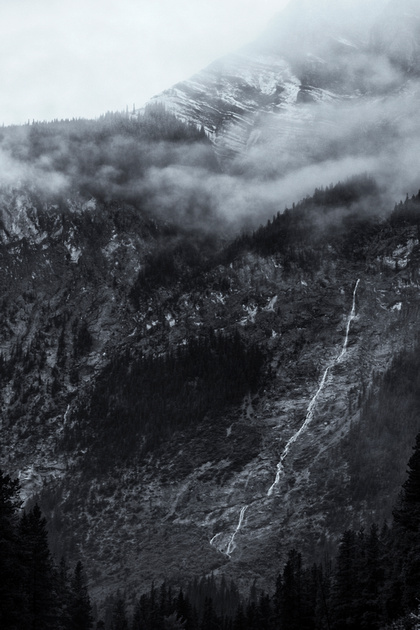 I arrived in Lake Louise, and as I had hoped, found myself in an empty parking lot.  I celebrated with a wonderful 30 minute power nap before heading towards the trail.  I met a grand total of four other people on my way up towards Lake Agnes and I started to question my level of preparedness. One lady who had passed me going up the trail was wearing flip flops, shorts, a light jacket and a garbage bag to ineffectively fend off the rain. In comparison, I had packed a small stove and coffee pot, assorted beverages and tea bags, pickle and cheese sandwiches, my winter coat, extra socks, mittens and toque, an umbrella and various camera gear. Not to mention the boots, wool socks and multiple layers I was wearing.  I stopped at Mirror Lake to take a few photos, the flip flop lady went by again, this time on her way home. She mentioned the tea house was closed. I could have told her that. She was very wet. She didn't look very happy. I stopped questioning my level of preparedness, and comfortably (okay, probably a bit smugly too) hopped along the lake shore.

Arriving at the Tea House I was not surprised to see... well... very little.  The mountains were obscured by the heavy precipitation, turning the valley into a calm, nearly monochromatic picture. I treated  myself to a pickle and cheese sandwich and a hot cup of English Breakfast tea, courtesy of my over prepared backpack.  As I sat eating my sandwich and sipping my tea, the rain which had been steadily falling all morning quickly changed to snow. I'd been considering hiking over the beehive but seeing the back end of the lake still covered in snow and having absolutely zero avalanche training, I opted to hike back the same way I'd come. After taking a few pictures of course.

I gingerly stepped my way over some boulders and set up my camera, balancing precariously on the rocks and holding an umbrella with my chin to feebly hold some of the moisture off of the lens. In the distance, I could hear giggling and strained to see a pair of hikers silhouetted against the snow.  They picked their way down a set of switchbacks on the other side of the lake.  I studied the steep, snowy terrain they were about to cross and eagerly waited for the composition to unfold.  I selfishly thought about switching lenses and then wondered, more importantly, if they should maybe head back the way they came. 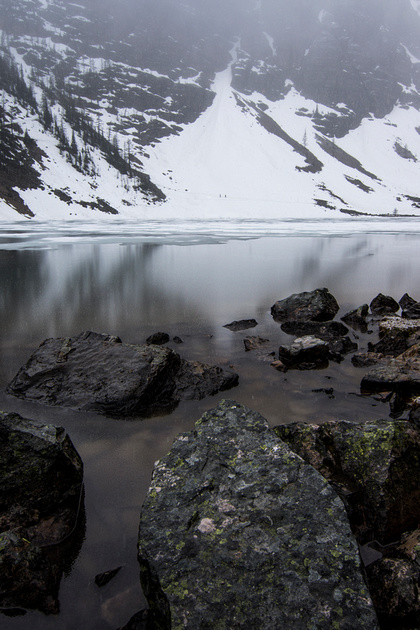 Just then, the thundering crack of an avalanche echoed in the valley followed by the rumbling crash of snow and boulders.  The hikers froze. I looked around nervously.  The visibility was next to nothing further down the lake and I strained to see where the avalanche had occurred, hoping the hikers would not be affected. The crashing subsided and the pair continued making their way around the lake, a little more sombrely than moments before. They paused briefly to snap photos of each other.  I snapped photos of them too, though the combination of falling snow and shutter speed rendered the photos nearly useless from the splotches of snow. I returned a lens to my bag and noticed the bag appeared to be gaining some weight.

Despite already relieving my backpack of a few sandwiches and a victory beer, the snow and rain had completely saturated it's outer layers making it even heavier than before.  Aside from the additional weight of the excess water I would now have to carry I wondered how the camera gear would fare on the way back.  I wrapped the cameras and lenses in some cloth to protect them as best as I could and started making my way home, stopping momentarily to photograph the falls flowing out of the lake. More people trickled up the trail as I was on my way down.  A cute little dog in a snazzy little rain coat preceded more people clad in garbage bags and we joked about how well the dog was dressed compared to it's people. But I quickly grew weary of passing on my smiles and "hello's" and the "nice day if it don't rain's" to the increasingly steady flow of hikers and turned onto the horse trail to finish the hike with only the steady plodding of my boots and beating of my heart for distractions. 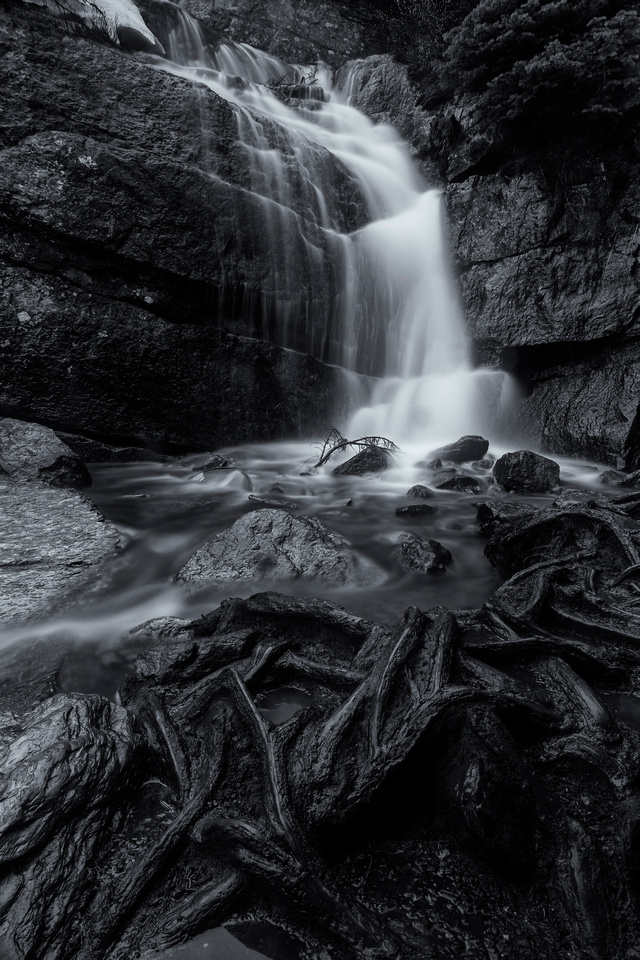 Once back in the parking lot, I checked the clock and determined I'd have just enough time to scoot into Silverton Falls, a spot I'd only ever visited before with Creepy-dog in tow.  My surprisingly strong 25 pound dog has a habit of anxiously tugging on the leash and helping me produce less than stellar photos in the process and though I love her company, she is not as patient as I am when it comes to photography. I was looking forward to a more relaxed visit.   In stark contrast to the last location, I had the place to myself, normal for this set of falls but still surprising considering the proximity to the highway. The sun started to peek out of the clouds, illuminating the emerald green forest around me.  It was nice to not have to share and I smiled to myself as I clicked the shutter.