Most of my youth was spent in a little hamlet nestled among towering evergreen trees.  Summer time was spent finding as much trouble as possible, riding our bicycles through trails or salvaging scrap wood and rusty nails to construct fortress-like shrines to the almighty tetanus vaccination among the tree branches.  We were generally carefree kids, yet even the youngest among us knew to keep an eye and an ear on the forest for predators, occasionally halting a game of hide and go seek with someone yelling out "BEAR!" We'd emerge from our hiding places and gather together silently to listen for the breaking of branches, straining our eyes towards the thick underbrush in order to verify if the danger was real or imagined.

In the daytime, with every kid in town behind you for courage, it was easy to defiantly rush towards the edge of the forest, yelling and chasing off potential predators, earning the respect and admiration of your peers in the process.  More often than not, the alleged bear would turn out to be a shadow among the leaves, but occasionally a grazing deer would lazily glance up at us, chewing it's grass and wondering what we were carrying on about. Once darkness fell though, it was less easy to find the courage to stare down a hungry animal as one by one the kids drifted home to bed until you were alone. 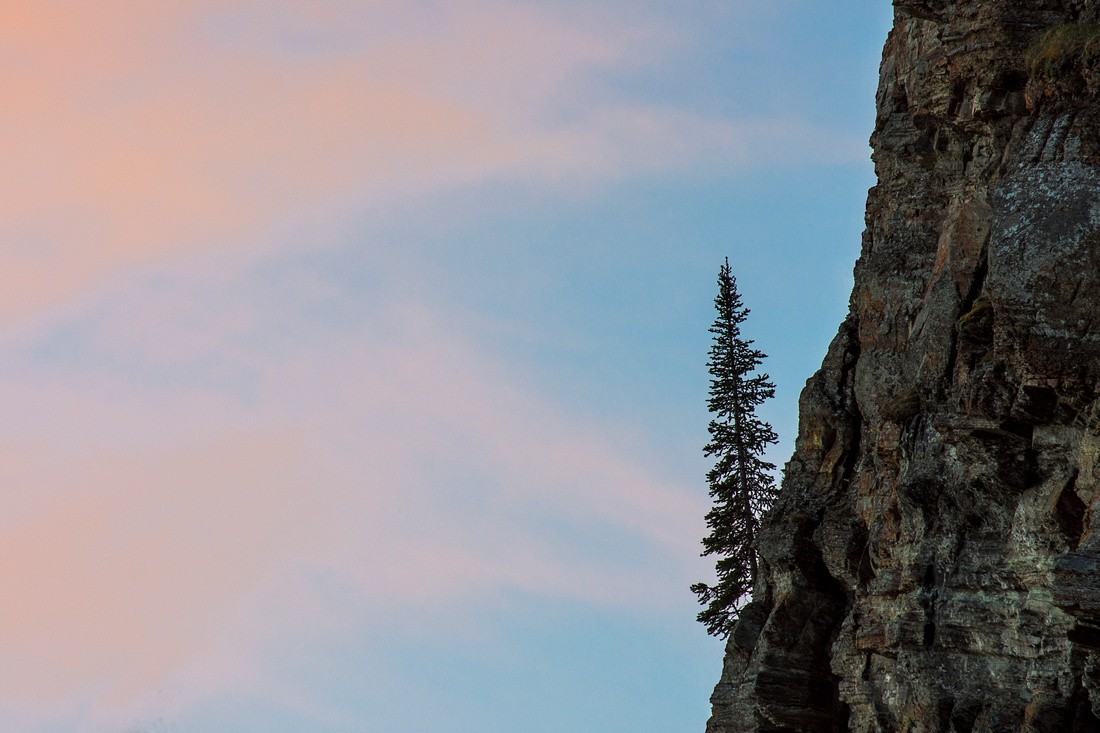 Little Tree in a Big World

My house was situated on a hill at the edge of town, tucked neatly into a corner and surrounded by forest capable of harbouring hungry bears, cougars and wolves. We knew this to be fact, not only from the signs left by the bears on our trails through the woods,  but the rumours that spread like wildfire whenever an emboldened cougar or wolf stole into town in the middle of the night searching for an easy snack in the form of pet dogs and little girls who didn't listen to their mothers.  As night settled in, I'd set off towards the sound of my Mom's increasingly frustrated voice calling my name to come home. Walking briskly from the other end of town along the edge of the forest, but not too briskly because everyone knows, when a predator stalks you, the last thing you should do is run. Ahead, a lone streetlight cast a meagre puddle of yellow light on the gravel road, the last semblance of safety before beginning the impossibly long ascent up our driveway and into the darkness. With every quick step I took, the light from the streetlamp faded and the urge to run from the creatures lurking beyond sight intensified. I restrained myself, trying my best to ignore the potential threat mere feet away among the towering evergreen trees. Was that a growl I just heard?  I forced myself to walk at a regular pace until the pressure built and I could no longer stand it. I sprinted the last fifty metres to the house with a stampede of teeth and claws hot on my heels. The porch light clicked on as I whizzed past, illuminating a shortcut between the garage and the house as I swung around the corner, ripped open the door and threw myself inside the house amazed I was still in one piece.

For years, it was a nightly routine.

I can't say with confidence that I've grown out of it. 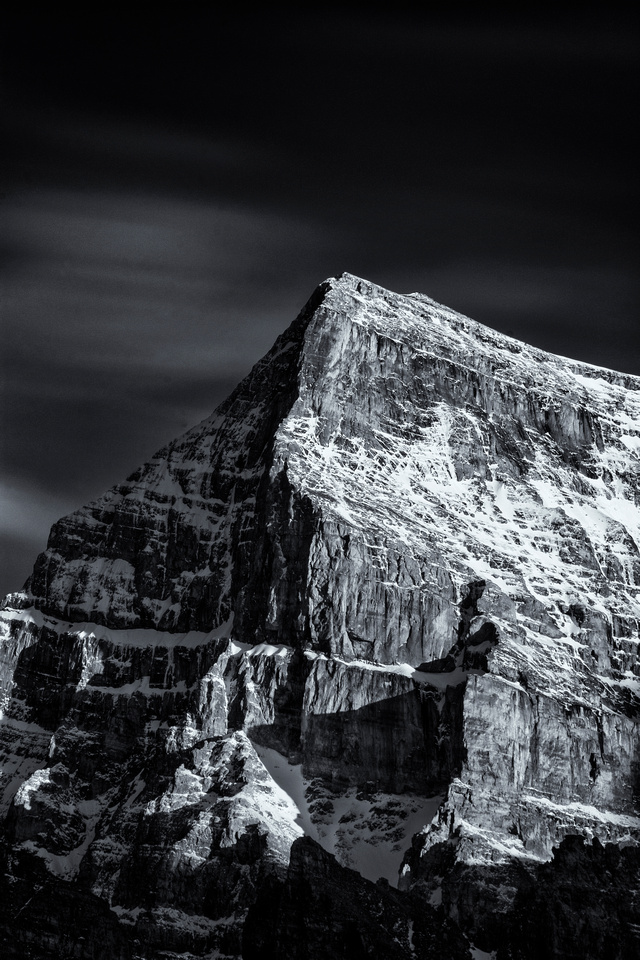 The games of hide and go seek long over, these days the lure of the camera entices me out of the city with it's millions of streetlights casting safety nets into the night, and back towards the dark forest and the creatures it hides.  Because along with the creatures and the potential for danger, the wilderness holds within it a magical light that neither myself nor my camera can resist.  That's why I found myself packing up a bag full of gear one Friday afternoon, and stepping onto the trail towards the setting sun despite the 10 year old version of me inside begging "Don't go". As dinnertime approached, the number of hikers I met dwindled until finally I was alone among the evergreen trees, placing one foot in front of the other at a snails pace lest I require the energy to fend off a bear later. (You know, in case the two bottles of bear spray I had weren't good enough) 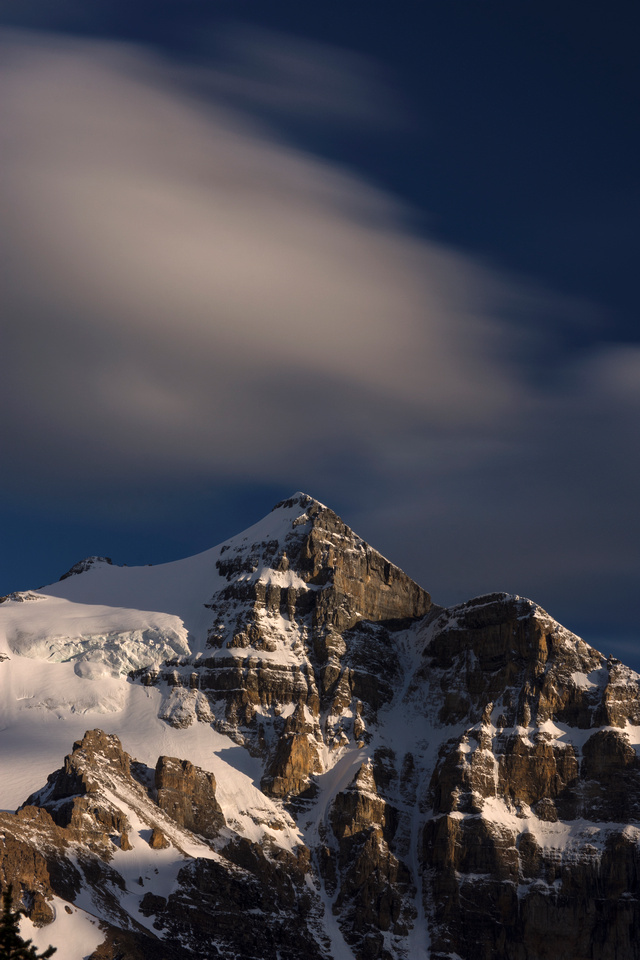 I reached the top of the Big Beehive above Lake Agnes an hour earlier than I had anticipated, and surveyed the area for potential compositions to remember when the sun began to set.  I opened my backpack and took out a bag of beef jerky, breaking the seal and immediately cursing myself for packing something that smelled so strong.  Surely every Grizzly Bear within 100 kilometres would now be on it's way to find out where the delicious aroma was coming from. I hurriedly finished my dinner and sealed the garbage in it's bag as tightly as I could, and then the waiting began.

I waited for the sun to set, busying myself with changing into warm dry clothes before I got too cold, then with setting up the tripod for long exposures time and again. Once the sun had set and the light began to fade, I waited for darkness to arrive and bring the stars with it. And waited. I had the camera set up and ready to fire when the time was right but the summer solstice was only a few days away and the faint glow of the sun was taking it's sweet time leaving the sky. 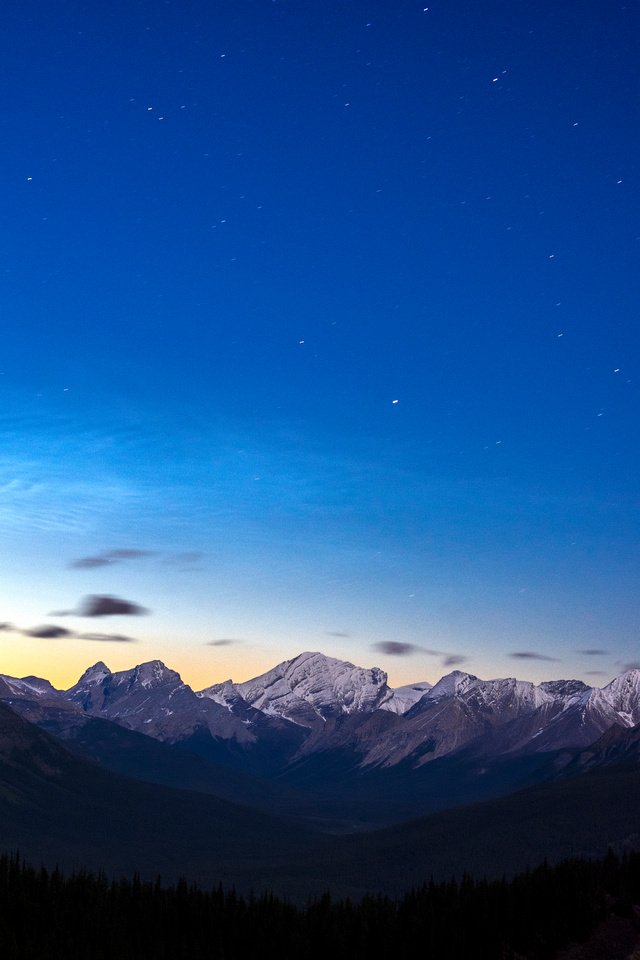 I strained to hear through the silence for any sign of life near by. Occasionally I'd think of something to say that might deter any large hungry, mammals from venturing too close, wondering if loudly reciting a recipe for wild game stew would make the situation better or worse. I made pleasant small talk with a nearby bird, remarking on what a nice night it was.  I nervously fidgeted, sitting down, then standing, then pacing and finally sitting again.  Still, the light in the distant sky did not fully dissipate until well after midnight, by then, I'd been perched on the rock high above Lake Agnes for nearly six hours. More than enough time for a hungry bear to make the trek to find me.

I focused intently on the camera, a tactic that had been working fairly well at keeping my imagination reigned in.  But as the sun set and the moon rose, and the shadows in the trees became longer my imagination began wander.  Soon the shadows grew wider and they began to grow legs and snouts and ears, it wouldn't be long before the shadows began to move, and think, and prey on women who smelled distinctly of warm beer and Teriyaki flavoured beef jerky. 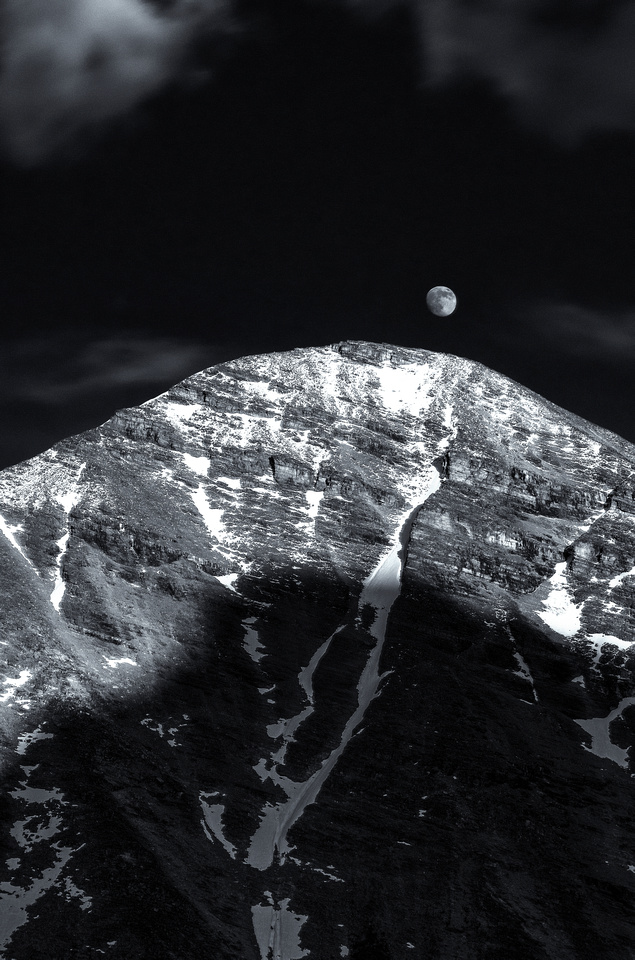 A rustling of leaves in the underbrush and then a pair of eyes glowing in the light of my headlamp.  "HEY THERE" I said in my manliest, scariest voice. The animal froze in it's steps. I froze in mine.  The eyes staring at me were less than six feet away.  The animal, no bigger than my shoe, was merely a Pika. "Shoo!" I yelled and the Pika scurried off into the night.  I giggled nervously and returned to my camera. Just a Pika, no need to panic.

A rustling of leaves, again the Pika hopped in to the light of my headlamp and began stealing it's way toward my backpack, but I was prepared this time.  "Hey, you again, GET GET GET" and I stomped my way menacingly toward the Pika.  The Pika shit it's pants, ran away and disappeared behind some rocks. Feeling a bit guilty, but satisfied that the Pika would not be returning,  I turned to my camera.  Just then, the rustling was heard again. This time, it was directly underfoot and I looked down in time to see the leaves beside my boots moving.  I screamed, but it was not a girly, high pitched, cutesy little scream that you would expect from someone as girly and cute as me (super cute by the way, ask my parents). This scream was an involuntary sound. A scream that accidentally slipped from my face in a kind of low, moaning reserved specially for the occasion of my death as I had indeed, just died a little bit.  I jumped back. The new, more dangerous Pika jumped back the other way and left me alone again in the darkness. I'd officially had enough.

Pictured Below: the very cute but totally murderous Pika 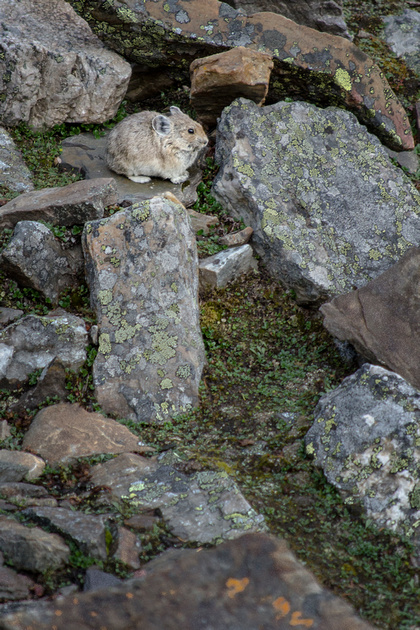 I packed my camera into my bag and checked the time, nearly 2 am.  It was time to go anyway. I'd have enough time to hike down to the lake, make myself a bit of breakfast and a few dozen cups of coffee before the sun rose.  I picked my way down the trail, keeping a brisk pace, but not too brisk because everyone knows, if a predator stalks you, the last thing you should do is run.  Soon, the Lake Agnes Teahouse came into view and I restrained my urge to sprint towards it because I'm an adult now, and adults are not afraid of the dark. I settled in on the porch of the Teahouse with a cup of coffee brewed from the lake water, and waited for dawn.

If anyone asked, I would be able to say I'd planned the whole thing out this way and that I hadn't let a couple of curious little Pika's scare me off the mountain. 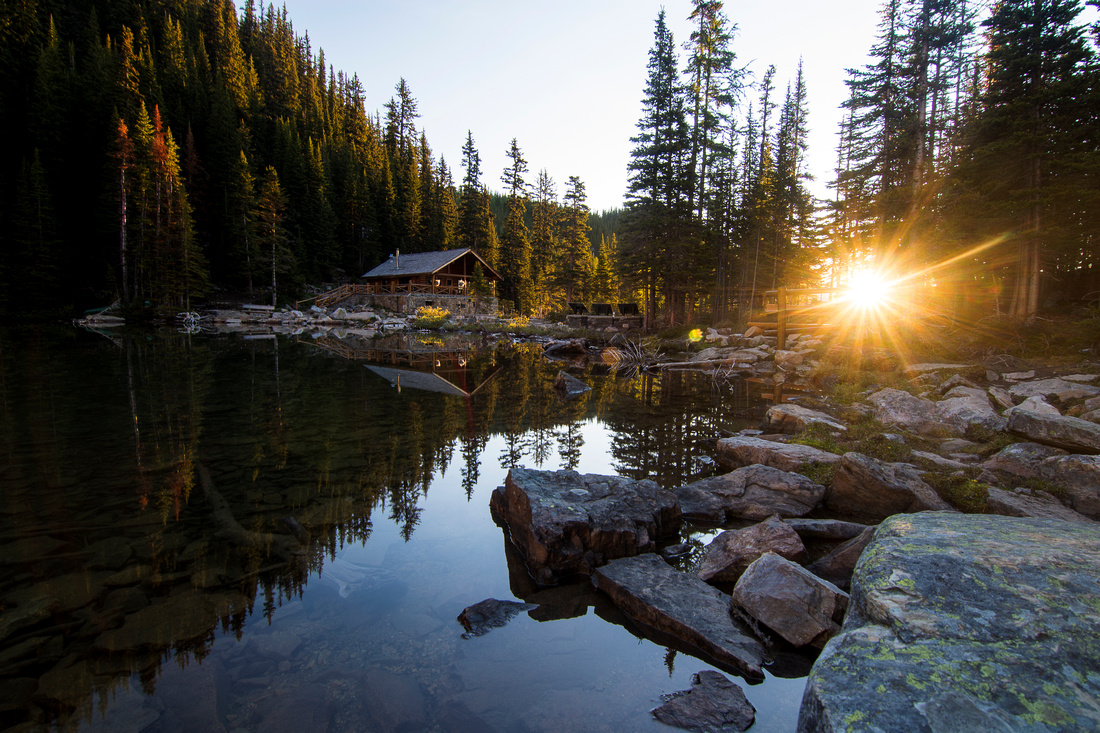 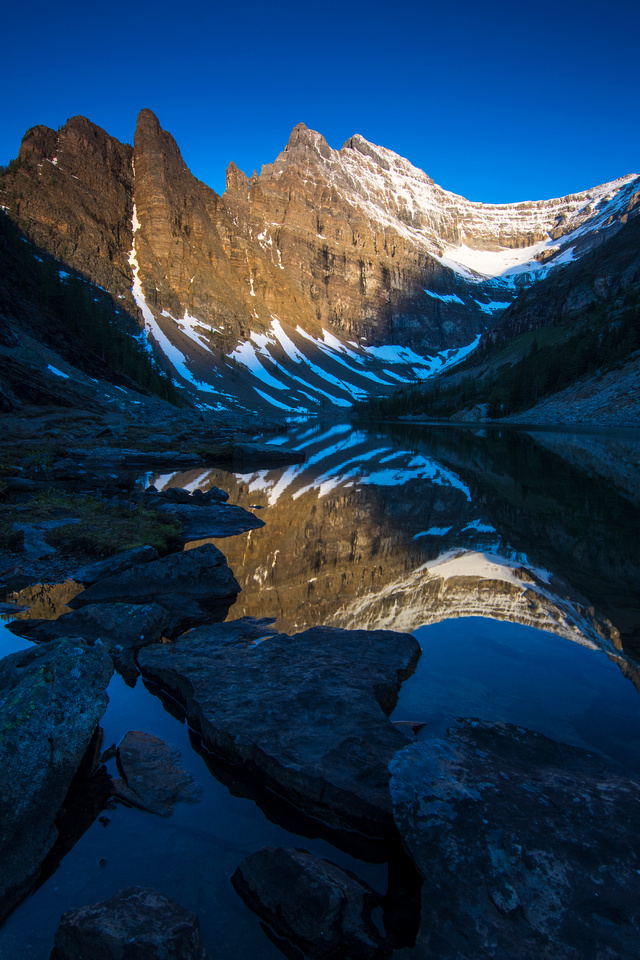