Ever since my visit last January, I've had a sneaking suspicion in the back of my mind that Red Rock Coulee, tucked away in the South East corner of Alberta, might be even more photogenic in the summer.  I was finally able to confirm that suspicion early last week when I packed up my truck and set out on an afternoon drive.

In stark contrast to my last trip, the parking lot was fairly busy when I arrived and several groups of people were roaming around the boulders, snapping photos and chatting among themselves. I hadn't really expected the company and since I had dressed for a long hot drive I felt terribly out of place standing in the parking lot wearing only a pair of sandals and a sun dress.  I quietly flipped down the tailgate of the truck and crawled underneath the canopy as gracefully as I could manage (which is to say, not very gracefully at all), stealing glances over my shoulder to make sure the people I was currently displaying my underpants to weren't paying attention. They weren't, or if they were, at least they were being more discreet than I was.  I emerged from the cocoon of the truck no longer resembling a $2 whore, grabbed my camera bag and checked the time.  Three hours forty four minutes until sunset. I had some time to kill. 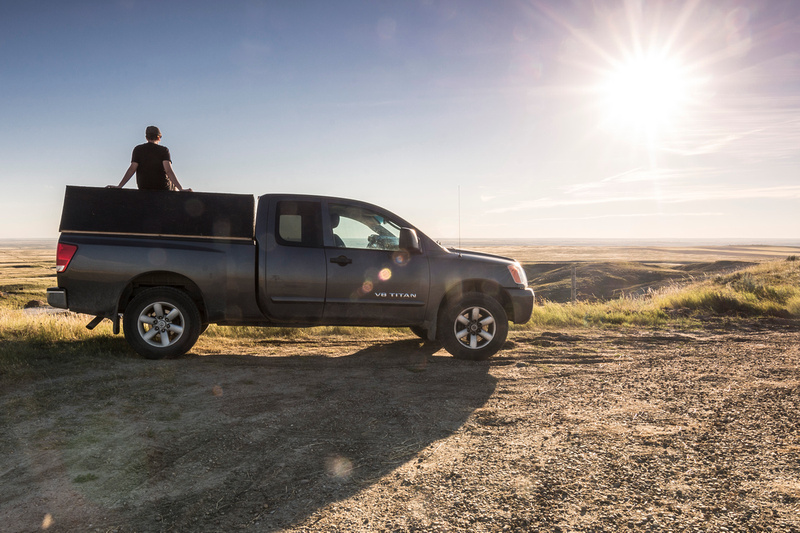 Above: Instagram worthy self portrait without needing to drive out of the the parking lot

I set down my camera bag, opened a can of soup to cook for supper and grabbed a beer from the cooler instead.

At three hours thirty six minutes to sunset, having eaten my supper, I decided I may as well poke around and decide on a few compositions to shoot later in the day. Like a gleeful kid in a candy store, I skipped my way towards the boulders and the thousands of opportunities they presented. 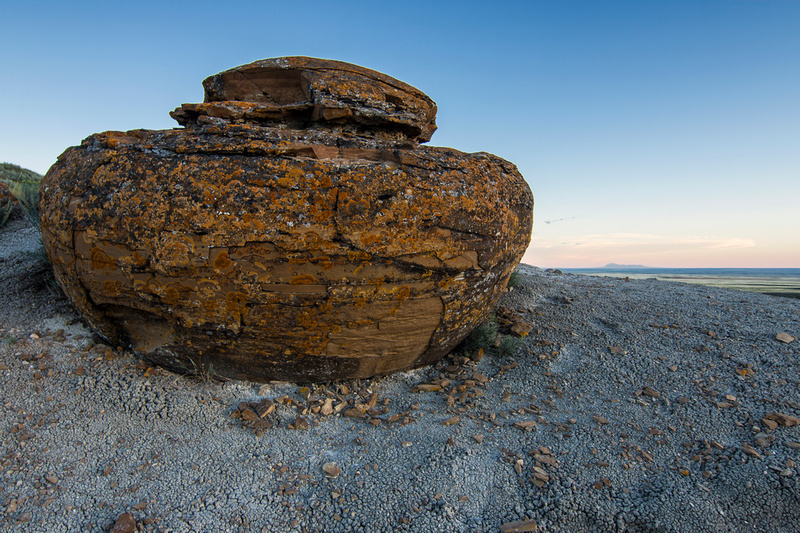 At one hour seventeen minutes to sunset, having decided on a few choice boulders to focus on, I perched on top of a picnic table and watched the last group of people leave the parking lot.  They piled into the car, arguing about where to go for dinner even though Mom repeatedly said "I'm not hungry". I wished I was hungry so I could cook more soup and have something to do. Instead, I sipped my beer and picked off interesting lines in the distance with my telephoto lens and occasionally flailed at the mosquitoes.  A storm was brewing in the distance and I wondered if it would ruin the sunset for me. 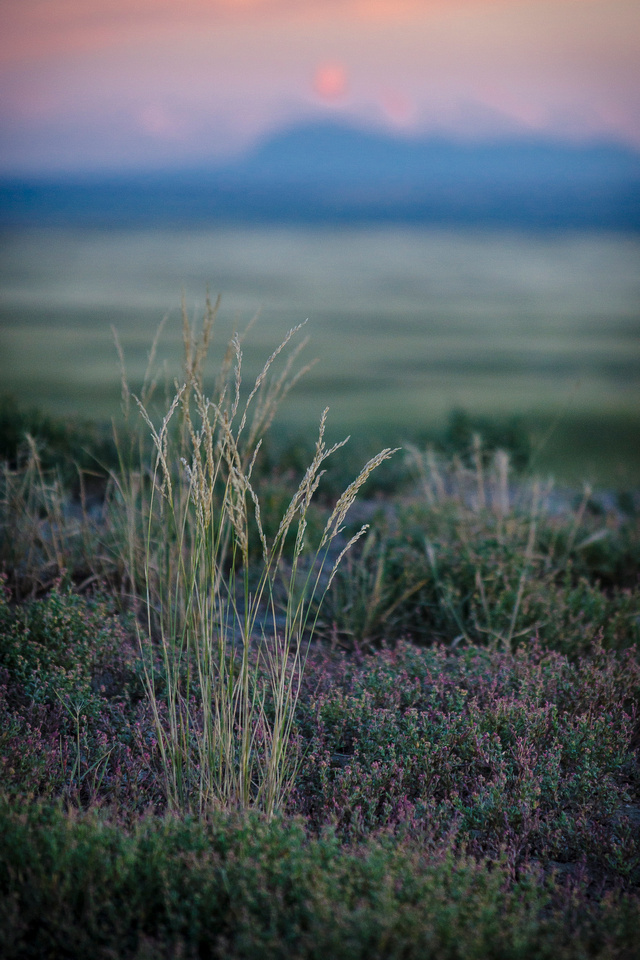 At one hour six minutes to sunset, the sun began to duck behind the storm clouds, casting a pale pink light across the landscape.  The normally impeccably punctual sunset was over an hour early, and I still had not finished my beer.

All hell broke loose as I scrambled to get in position before the light faded away for good, frantically changing over to a wide lens and throwing myself into the dirt.  On my drive that afternoon I'd been concerned about meeting a rattlesnake, but as the sun set behind the clouds it was the snakes who were more concerned with me as I slithered across the terrain. 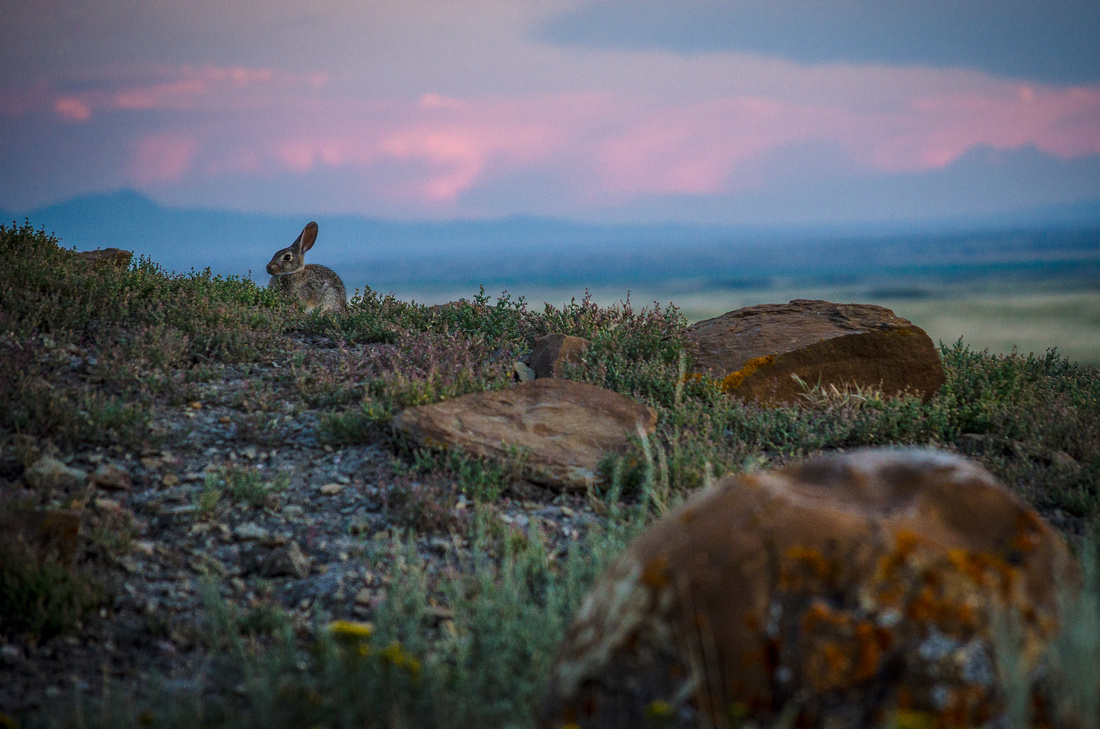 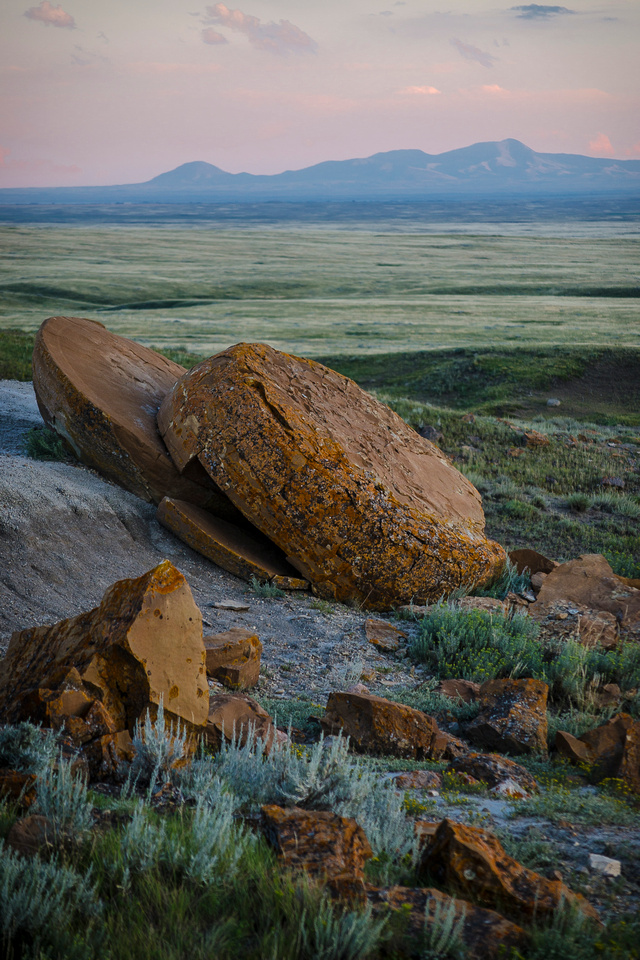 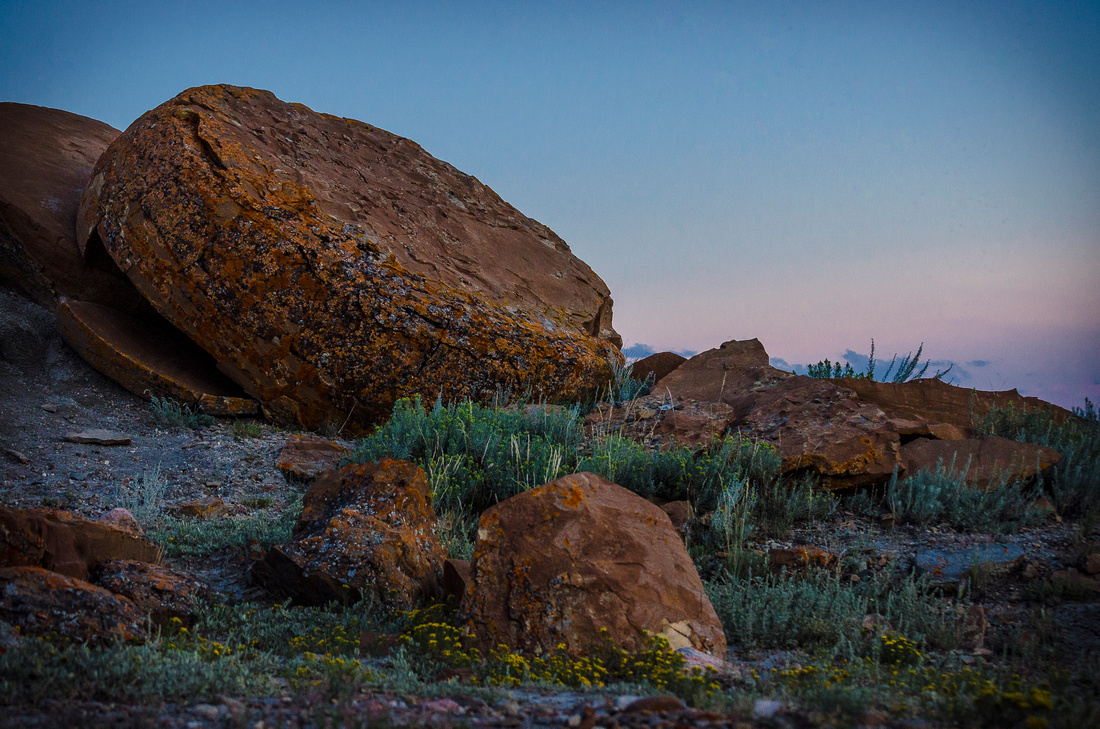 After the sun set and the dust settled, I crawled into the cozy bed under the truck canopy and waited for my alarm to ring. Finally, at 3:50 am, my clock gave me permission to stop trying to sleep and I poked my head outside.  With over an hour to wait until sunrise, I lazed about in the drivers seat of the truck and boiled a pot of water on the console beside me.  In the distance, a storm was brewing, possibly the same storm that had so rudely interrupted my sunset last night.  A streak of lightning flashed across the sky as I poured the water into metal cups for my coffee and oatmeal. I didn't even have a chance to put the cup of coffee to my lips before another bolt of lightning illuminated the landscape.

Again, all hell broke loose as I scrambled for my camera and tripod.  Sunrise be damned, it's not every day you're presented with a lightning storm in a location as scenic as this.  I shimmied through the gate of the barbed wire fence and set up my photo gear for a series of long exposures.  I just needed one shot to work, maybe two or possibly three but definitely no more than four, five max.  The bolts struck the ground in the distance, silently at first but then the thunder became audible.  I glanced around me and noticed I was becoming surrounded on three sides by lightning.  With each thirty second exposure, the lightning strikes approached and I stopped losing count between the flashes of light and the sound of the thunder.  Just a few more shots to make sure I've got something usable as I fumbled around in the dark with the camera.  With every passing exposure, I was becoming acutely aware of how positively reckless it was to be standing on top of a coulee in the middle of the prairie with a metal tripod in my hands and I backed away with every click of the shutter, as if it would make a difference. I was in a game of chicken with the storm, and I was never very good at that game. 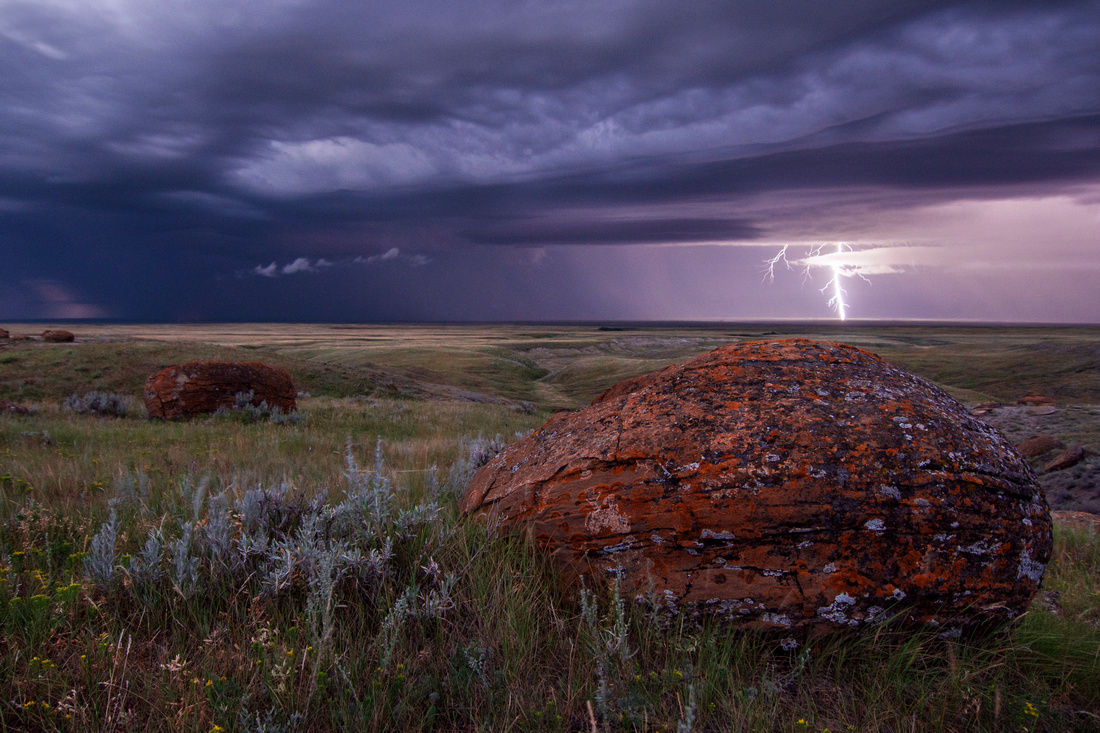 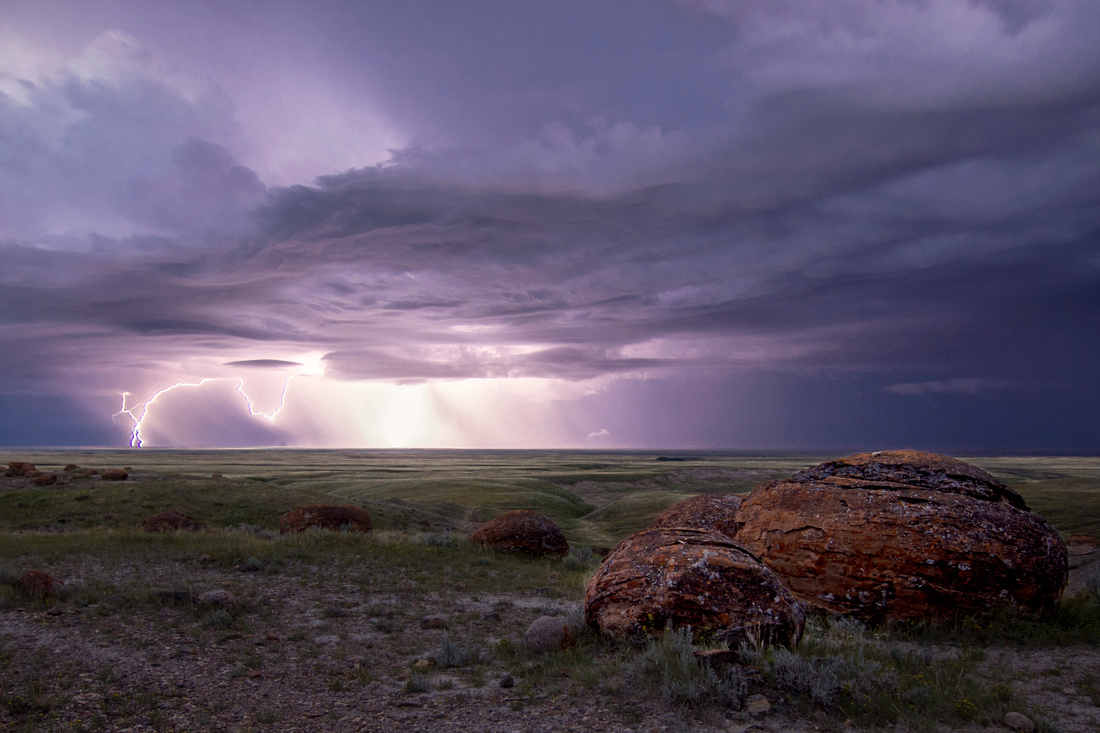 The rain began to fall, gently at first, but with rapidly increasing intensity. Then the wind began to howl and pelted the rain against my face. I decided to pull the plug and bolted back towards the truck, throwing the camera and tripod into the front seat and starting the engine.  The windows fogged immediately and hail began to bounce off the windshield. I wondered if being hit by lightning would fry the electronics in the truck and decided against sticking around to find out.  I threw the truck into drive and peeled out of the parking lot knocking the remaining pot of water onto the floor. I'd forgotten all about breakfast, my cup of oatmeal sitting hardened and cold in the passenger seat next to my camera.  Within a few hundred metres, I'd driven out of the rain and a beautiful sunrise lit cloud was forming in front of me. I frantically looked around for foreground interest, and finding nothing, decided a few exposures in the ditch would have to do before the storm was on top of me again. 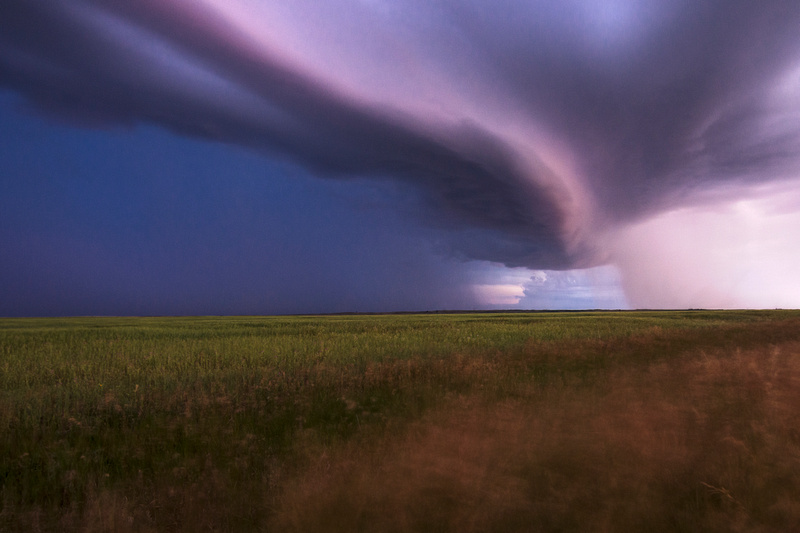 Above: I named this photo "Rodney" because Dangerfield (get it?) apparently nobody thought it was funny. Wow, that joke fell flat...

I'd expected Red Rock Coulee to be more photogenic in the summer and I was right, but never in a million years would I have guessed that a visit to the prairies could be outright exciting.