The ocean lured me closer with every crashing wave, and with pants rolled up I waded through warm tide pools, illuminated by distant street lights and the glow of my headlamp. In the dark, I could hear the tide thrashing into a small band of cliffs with a thunderous roar, occasionally spilling cool water over the top and into the pools I was occupying to lap at the bottom of my pants.  As twilight began to form silhouettes of compositions for me, I set my bag down and made my way through the labyrinth of pools, anemone and rocks to set up my camera. This is the life. 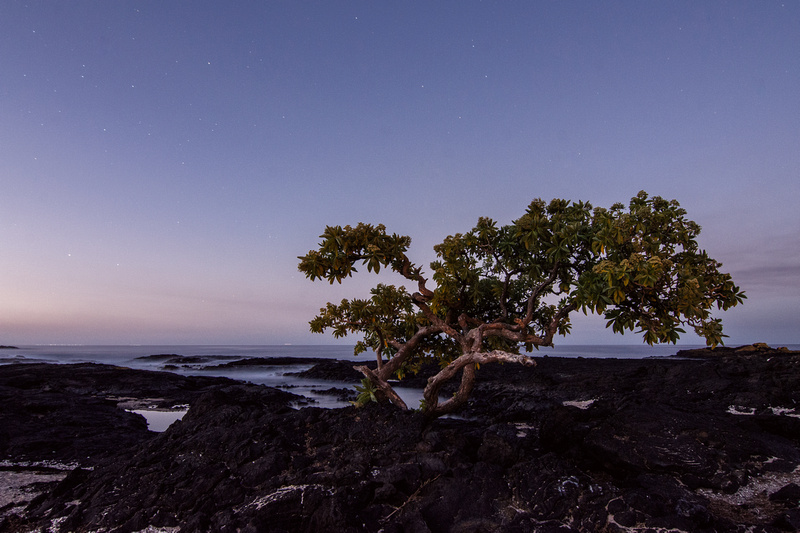 It just wouldn't be a proper vacation, without returning home feeling completely exhausted, in need of a 3 day nap and a hot shower.  In that regard, Hawaii was a complete success.  That's not to say there wasn't a good deal of relaxation and downtime, there was.  While Mr. Bastard and I were there, we sampled more than our fair share of local beer, Kona coffee and a lifetime of Spam in flavours I didn't know existed - the finer things in life. But more often than not we just weren't content with a day of lounging around on a beach.  Our days were full of hiking, snorkelling and exploration.  On top of that - photography, the most exhausting hobby I could have possibly fallen in love with.

It seemed strange to continually drag myself out of bed at 4 am to take a cold shower (Note to self: next time book a hotel that has hot water...)  while on vacation.  Leaving my peacefully sleeping husband behind in the cool air conditioned room to walk out in to the stifling heat, alone, in to a city I was not familiar with wasn't an easy thing to do, but the reasonable sunrise and sunset times were too hard to resist and with only a week to capture as much as I could, I was determined to make the most of my time on the island. 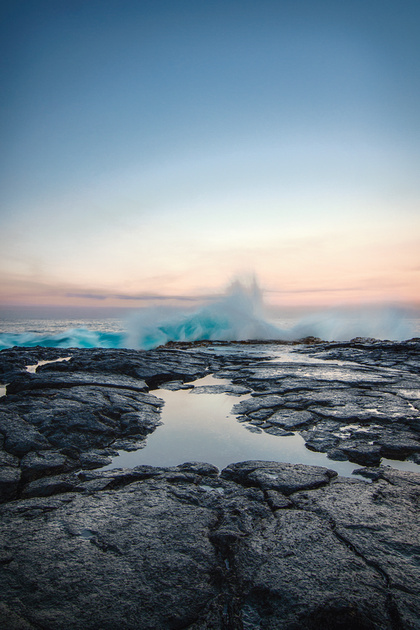 I consider myself lucky, either that or extremely persuasive, in that Mr. Bastard agreed to join me on a rather ambitious sunrise excursion.  I had been up for an hour already by the time Mr. Bastard's alarm clock rang around 2am, signalling our time to hit the road.  With eyes open just enough to make it from the hotel door and into the front seat of the car, he quickly fell back asleep while I drove through the night, drinking cans of cold brew coffee like it was my last day on earth.  As we neared the summit of Kiluea volcano in the dark, the glow of the crater could be seen on the horizon and I quietly lost my mind.  Mr. Bastard slept peacefully in the passenger seat unaware of the sights before us, as I began to swear a string of curse words under my breath that continued relentlessly for the next thirty minutes.

Finally, we pulled in to Volcano National Park and Mr. Bastard began to wake up.  I could hardly contain myself, and the moment I knew he was awake I let my curse words bubble to the surface like lava.   I won't repeat them here, but they sounded like "roly duck" except a lot louder, a lot more of them and I may have forgotten to breath in between words.

We parked our rental car at the summit of the crater, I let out the last of my "roly ducks" as I grabbed my camera bag, and then joined the few but dedicated pyjama clad tourists in awed silence.  Nobody spoke but to whisper to the person next to them as the glow of the crater battled starlight and sunrise for attention. The lava, miles away, hissed, and bubbled and roared at our silence. Had I not been intent on capturing the glow of the crater in the night, it's likely we would have opted to stay in bed only to visit during waking hours.  Twilight at the Kiluea crater was one of the most beautiful sights I have ever laid my eyes on, and I'm grateful my camera made me do it. 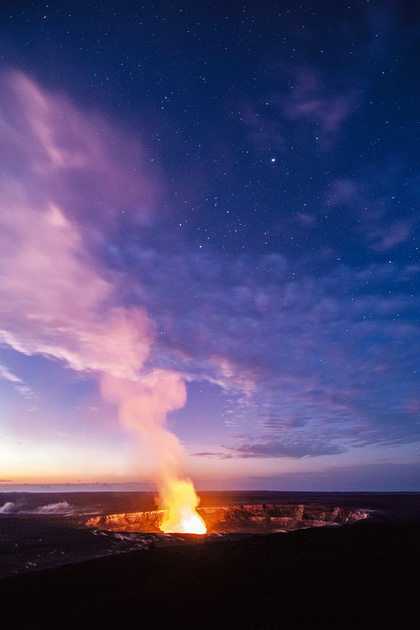