The alarm clock rang and my arm stretched out from under the covers to find it, I fumbled around in the dark and instinctively hit the snooze button.  Not that another ten minutes of lying in bed, wide awake, would do much for me, but the promise of at least a ten minute cat nap was too tempting. Despite crawling into bed at 8pm the night before, I hadn't managed to get a wink of sleep. Instead, I closed my eyes and let scenes of "What can go wrong when hiking alone in the dark" flash across my eyelids while I  waited for my 1:30 alarm. Alas, the apprehension of going solo night time hiking wasn't going to hold me back. Not this time. 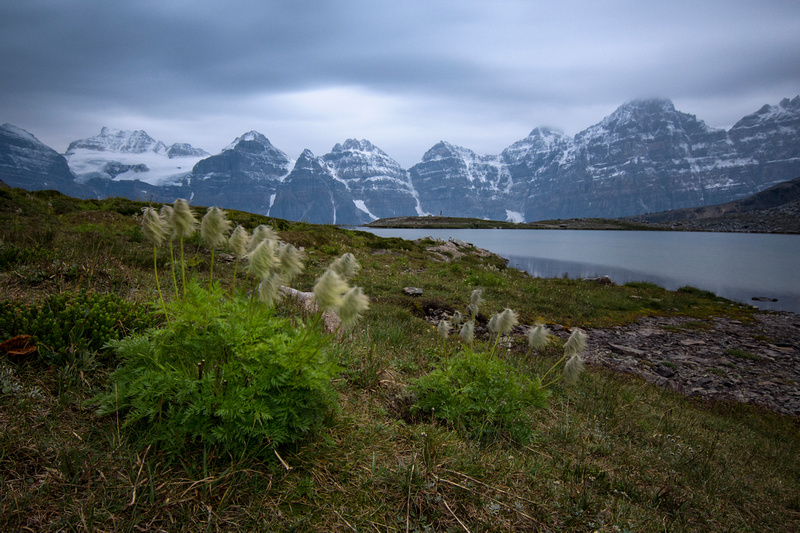 The first attempt I had made the summer before would have been successful had I not hesitated in the parking lot of Moraine Lake for far too long.  Arriving at the trail head by 3 am gave me plenty of time to reach my goal before dawn and I had confidently donned my hiking boots and stepped out in to the cool mountain air before seizing with fear. I paced in the parking lot for nearly an hour, weighing my options between staying at the relatively benign Moraine Lake shore and going to a far more interesting but risky Minnestimma Lake nearly five kilometres away.  It wasn't until the parking lot started filling up with photographers headed towards the famed rock pile, that I managed to step in to the dark forest, determined to not take the same photograph as the rest of the crowd.  I had hesitated for too long. 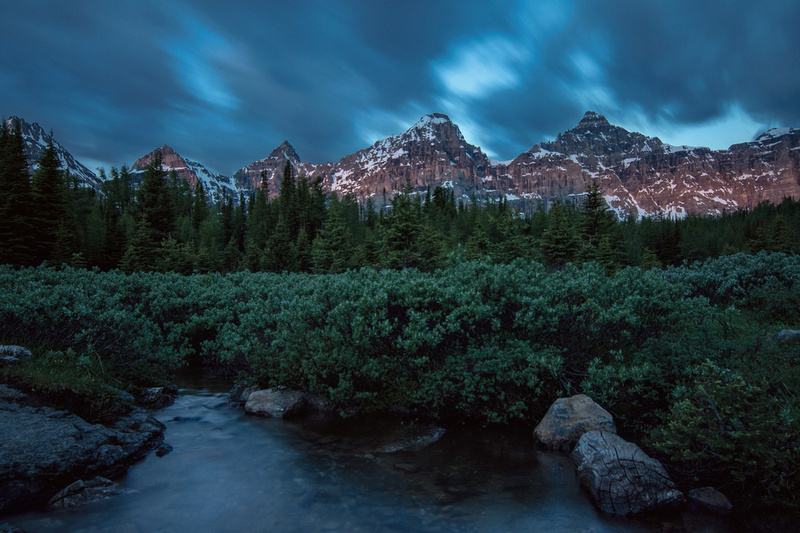 As the sky began to lighten, I reached a scenic clearing along the trail and I had to make a choice. I could either press on, not knowing how far I had to go before reaching the lake, or stay in a clearing which at least afforded me some views.  If I pressed on, I ran the risk of not being able to see anything when the mountains began to glow, and so I opted to stay put.  The decision was a wise one, as the early morning light burst through the clouds shortly after I had set up my camera. Soon, the light dulled and I, having run out of the courage and will power to see what was around the next corner, scurried back down the trail towards home. It wasn't until months later, when a girl friend and I had made the trek up Paradise valley, over Sentinel Pass and down to Moraine Lake, that I saw just how close  I had been to reaching the lakes before dawn.  I vowed that next summer I would make it. 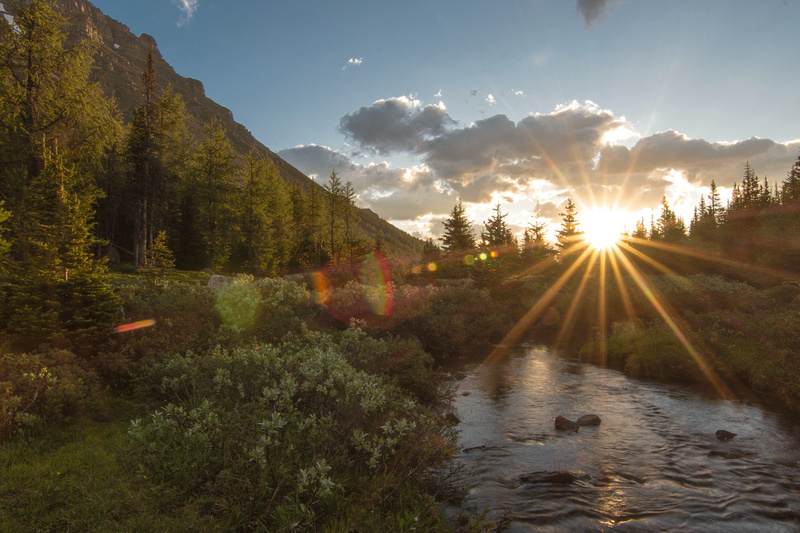 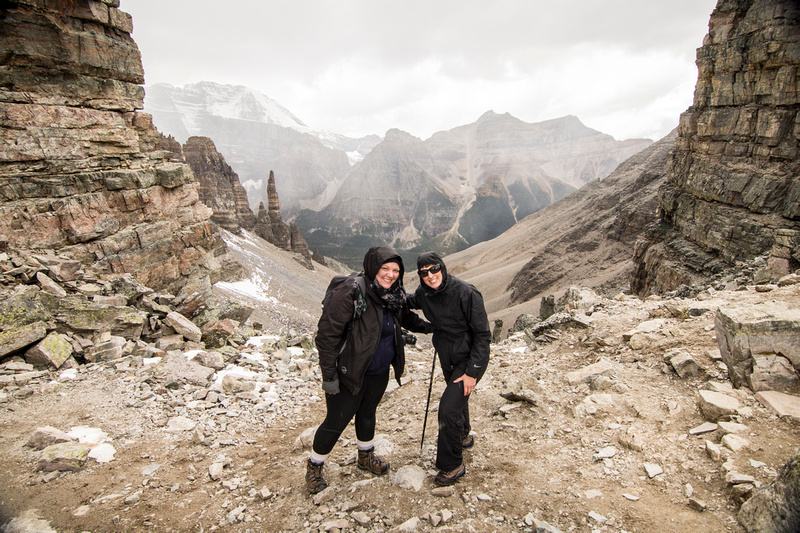 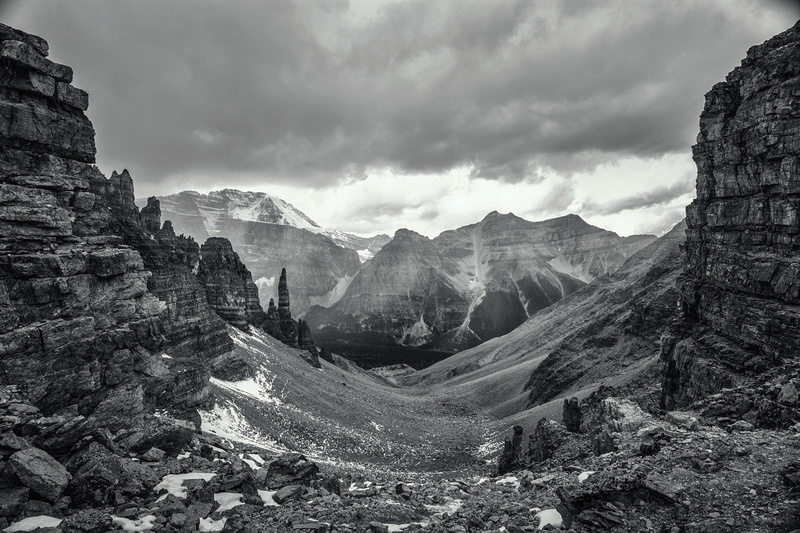 My headlights shone in to the numerous cars in the parking lot, their windows white with condensation from the occupants sleeping inside.  "I wasn't aware we were allowed to camp out in the parking lot now" I thought, as I killed the engine and moved my seat back so I could pull on my boots.  The rain pelted my windshield and I wiggled in to my rain suit before stepping outside and turning on my headlamp, illuminating the dizzying mist falling from the sky. I left the sleeping beauties behind and strode past the lodge and up the trail, reaching the first switch back with ease, and then promptly stopped.  "This is stupid" I muttered in to the darkness, it's raining, it's dark, it's scary, will it even be worth the effort? I turned on my heel and ambled back toward the parking lot.  Instead, I set my sights on the near by Consolation Lake, a much closer and lower elevation destination. If I was too cold and wet, at least the hike back to the warmth of my truck would be far shorter.

I strode past the lodge again, past the sleeping beauties in the parking lot and up the trail, reaching the junction to Consolation Lake with ease.  I picked my way down a small hill and in no time, reached a small boulder field and then promptly lost the trail in the dark. It might have been helpful if I had done this hike even once before in my lifetime, but I had not, and I turned on my heel and headed back toward the parking lot again.

Now, I was getting annoyed at myself, and set myself towards the original goal for the morning.  I strode past the sleeping beauties in the parking lot, past the lodge and up the trail in the other direction again and that's where I lost my nerve altogether.  With rain falling gently down on me, I stood heartbroken on the trail in the dark, cursing my lack of resolve. Through the trees, I could see headlamps beaming from the sleeping beauties, they had woken up and were beginning their assault of the famed rock pile on the shore of Moraine Lake.  None of them ventured toward me. Determined not to take the same photograph as the rest of the crowd, I wandered along the shoreline away from the crowd, but never out of sight, before settling in for sunrise. It was better than nothing, still I left feeling dejected, and vowed that next time I would make it. 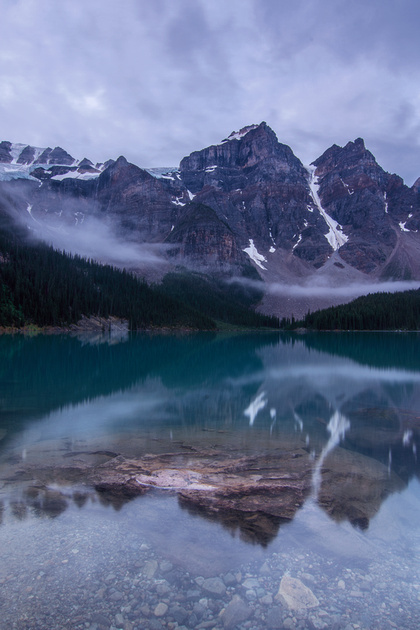 Despite carefully calculating the time I would need to reach my goal before dawn, I was running late. I had hit the snooze button a few too many times in an effort to stave off reality ten minutes at a time.  As I started on the trail for the third time, the sting of my previous attempt was still fresh in my mind and I had no intention of failing again. Not this time. I paused briefly at the information board to make sure it wasn't mandatory to hike in a group of four, and then began picking my way up the switchbacks at nearly double my regular pace.  As I made my way up the trail in the dark, a rustling noise in the brush made my heart flutter from adrenaline.  Fortunately, the only pair of eyes glowing in the light of my headlamp were from a small animal,  and I muttered "it's only a marten" to calm myself.  It wasn't long before I surpassed the turn around points from my previous attempts, and a pink glow formed on the horizon. I was nearly running through the alpine meadow, my heavy pack laden with camera gear jostling on my back.

Across the valley, a pair of lights appeared on the glacier of Mt. Fay and I watched fascinated as the lights moved up the glacier towards the summit before disappearing from view.  "Crazy bastards" I thought as I continued up the trail and the lakes came in to view.  I settled in to a small patch of gravel near the shore and set up my camera just as the sun began to peer through the clouds. 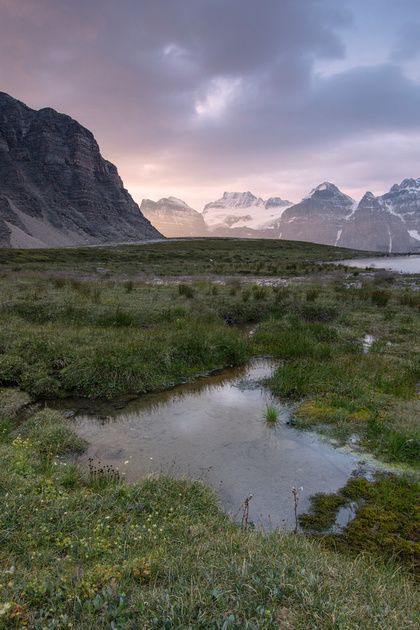 I turned the switch of my camera on - nothing happened, and my stomach sank. I reached in to my bag and grabbed a back up battery and popped it in to the camera. I turned the switch, again, nothing happened and panic began to rise in to my chest.  I blew on the battery like an old Nintendo cartridge, but again, nothing.  "At least I made it" I thought, as I snapped a photo with my phone and held back tears.  Finally, I jammed the battery in with force to make the connections and the camera turned on. I breathed a sigh of relief and turned my attention to the view before me, raising my arms up in celebration and complete awe. 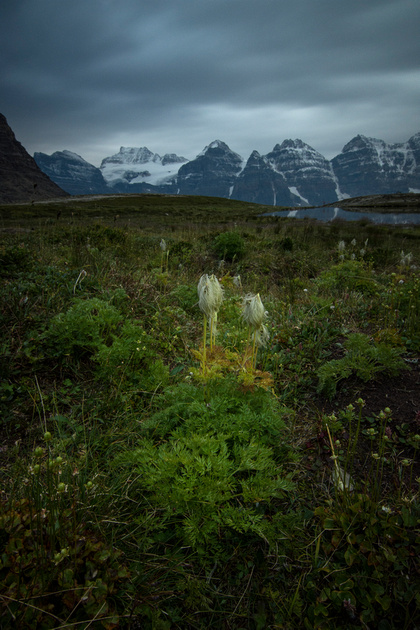 Soon, a pair of hikers appeared, and we excitedly marvelled at the light,"It's a hell of a way to start the day!" my grin stretched ear to ear as I set up a composition. Not long after the hikers left, a pair of photographers came to share the view and we exchanged elated high fives as the light danced around us.  Though the camera continued to threaten to fail, I managed to snap a few photos and my heart soared at having finally reached my goal. The marvellous light certainly didn't harm my good mood either. Setting the camera aside for a moment, I made myself a cup of coffee and sat down to soak in as much of the scene as I could until the weather changed and the views were replaced by a late summer snow storm. Finally, I became too cold to stay any longer, and I packed my bag and left the dreamy scene to return to reality. On my way down the trail, I vowed to make it to this magical place more often. 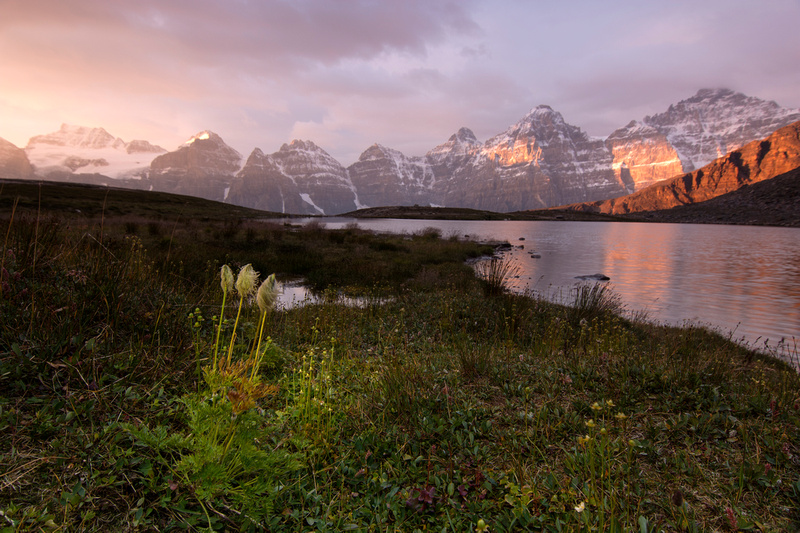