I hadn’t made it out of view of the parking lot before I began to question my decision to carry a pack nearly half my body weight over a mountain pass. How was I ever going to make it? More importantly, how would I make it home again?  “It’s a mental challenge more than a physical one” I told myself, and took another feeble step.

The weight of the pack sent razor blades across my back, after a hundred steps I’d had enough, I plopped to the ground and shimmied out of its grip. The contents of the bag were spilled along the trail and I tried to remember every internet article I had ever read about backpacks and how to pack them.  It turns out, I had unknowingly become well read in the art of packing a backpack for a trip, I’d just never done it in real life.  Once I had reorganized and balanced the weight of the gear, I sat on the trail again and shimmied back into the shoulder straps. In the parking lot I had put the pack on without issue, but I had used the tailgate of my pick-up truck and put it on while standing.  Here on the trail, figuring out how to stand up was quickly becoming a bit of a conundrum. 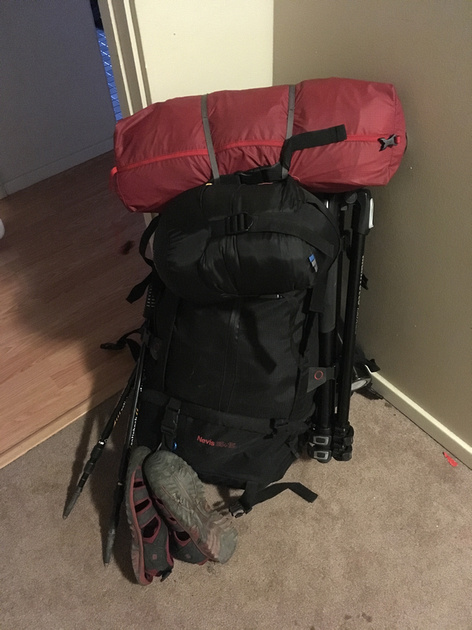 60 pounds of cameras and cheese

The nearby helicopter pad was busy shuttling Assiniboine bound passengers and they buzzed overhead while I flailed around helplessly on the trail like a turtle flipped onto its shell.  I could imagine the laughter from the comfortable passengers ascending over the trail above me, their conversations turning to the days ahead of them as my flailing arms and legs became mere  dots on the landscape. I grimaced at my awkward performance as I worked on gaining enough momentum to roll over on to my stomach. Finally, I rolled over, my knees ground in to the gravel with the weight now on top of me and I reached for my hiking poles to begin the mile long crawl to a standing position.  The pack felt slightly better, though the redistribution hadn’t made it any less heavy. I looked at the trail behind me, I looked longingly at my truck sitting in the parking lot.  I still had the opportunity to give up, maybe check in to a nearby hotel so nobody would know I had given up so quickly. I could claim my camera batteries weren’t charged when I came home in a few days without photos.  Instead, I took another step West, followed by many more steps.

The promise of a break at Watridge Lake kept me moving forward for the first few kilometres, but when the lake passed by on the trail I didn’t stop. Instead, I decided I would stop at the next creek crossing –whenever that might be, despite nearly every part of me screaming in protest.  I began to descend a very long hill as panic set in with the realization that what goes down, must go up again. What if I couldn’t make it back up this hill again in a few days? A future problem, I rationalized, as a refreshing creek came in to view. Somehow, I had managed to make it to the half way point of the day’s hike before taking a rest, and I celebrated with the delicious sandwich I had been promising myself since buying the ingredients a week before. 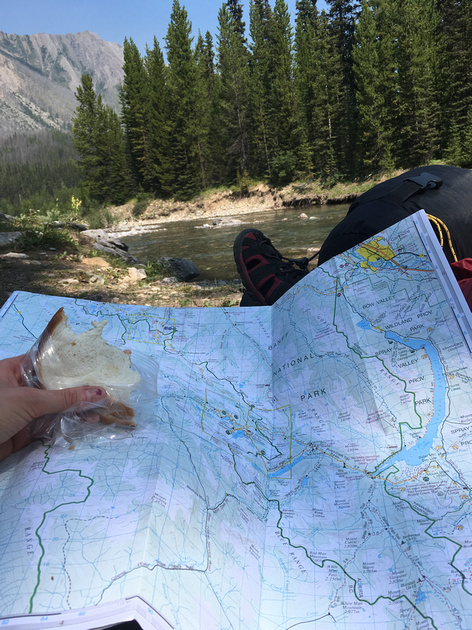 Dad's specialty sandwich and a view- this is the life

Refreshed, I waited for the last of the hikers in the area to move out of sight before I clumsily donned the pack again, and began the second leg of the day. The sun beat down on me mercilessly and I lost any hope I still had left of smelling nice on this trip. After hours of trudging along, I replaced my bear call with “Are we there yet?” and I yelled into the forest. The answer was a resounding silence which I took to mean “No”
Fatigue had set in and I began to will myself forward in mere 100 pace increments until I finally reached the day’s destination at Marvel Lake.  The half way point to Assiniboine – how people do the hike in a day I’ll probably never know, half way was more than enough for day one. 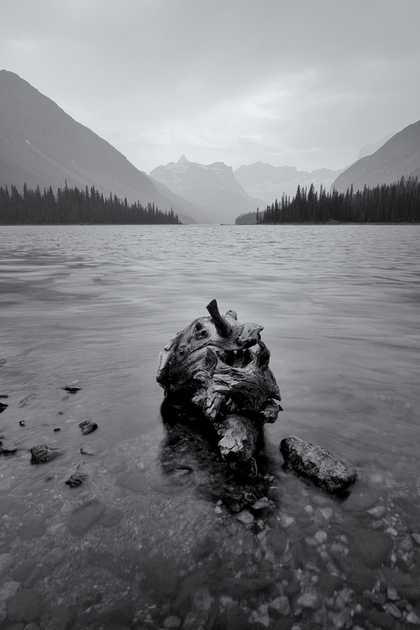 After modelling inefficiency setting up camp and feeding myself while increasing the day’s kilometre total by another 10, I was finally where I wanted to be. Plunked down on a lake shore with a camera.
The haze from nearby forest fires reduced the wilderness before me in to their most basic geometric shapes. The silence of the area, magnified by the lack of visual definition, was only broken by an occasional jumping fish.  Even the mosquitoes kept mostly to themselves, the whine of their wings beating against the thick smoky air was punctuated by the bees hovering among the reeds at my feet. A lot of bees. “Odd” I thought, but quickly turned attention back to my camera. In the distance, a single loon swam across the horizon, breaking the mirror like reflection and letting out a haunting cry. I hear you loon, I hope you find what you’re looking for. Day one was officially behind me and I made the last ascent of the day and crawled into my sleeping bag. 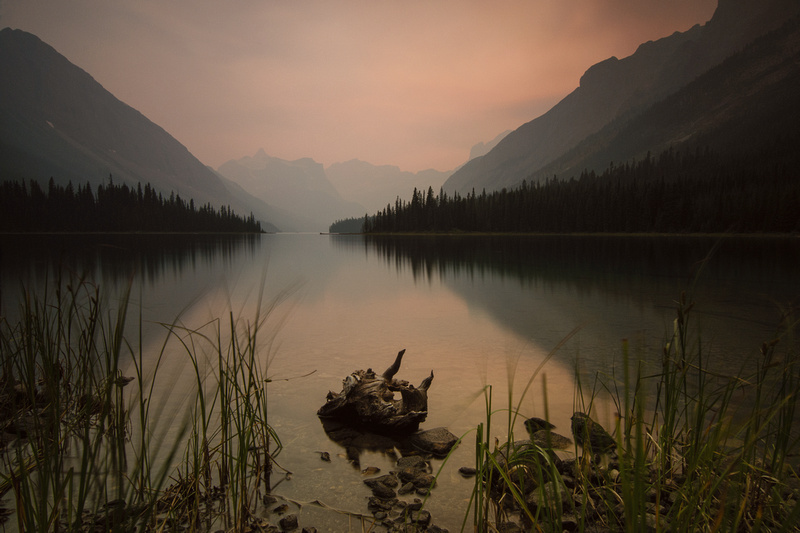 In a mood, I cancelled my sunrise photos in lieu of an early start.  The night had been cold, despite wearing a base layer, down jacket, rain suit and toque inside my -7 sleeping bag I had shivered all night. I had barely slept, and I wanted nothing more than to be tucked in to bed in a nice cozy hut.  The thought of a nap spurred me out of bed and onto the trail ahead of schedule for the day’s slog over the Assiniboine Pass.  I grumbled back on to the main trail, a few years too old to be stomping my feet and pouting. It wasn’t long before I passed by the National Park Wardens Cabin nestled in the trees alongside Bryant Creek. The view from the historic structure was marvelous in the early morning light, and I delayed my early start and fished my camera out of the pack.  Maybe this hiking business wasn’t so bad after all, and my mood lifted as I meandered around with the camera. 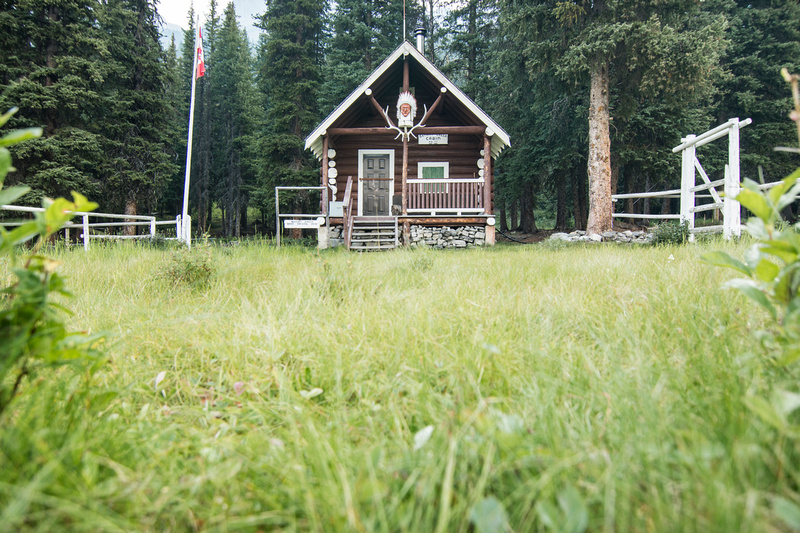 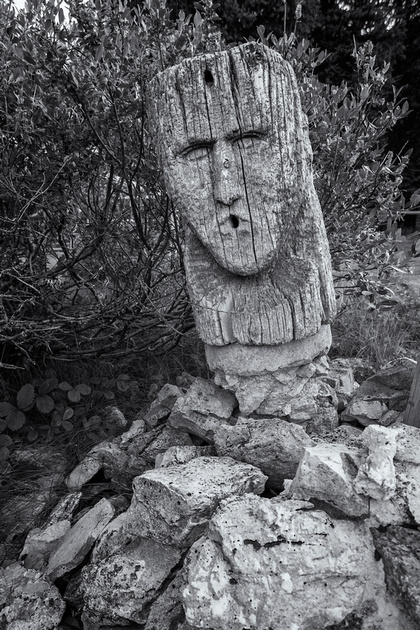 The camera had been a nice momentary distraction, but the amount of ground I had to cover that day weighed heavily in my mind, and I wrestled into the pack once again.  I moved rather quickly along the valley bottom in the cool morning air and I congratulated myself for my efficiency – until another scene caught my eye and my forward progress was halted in favour of the camera yet again.  At this rate, I’ll fill my cards up before I even get to Assiniboine. It was tempting to turn on my heel and head home, but I knew the best was yet to come. 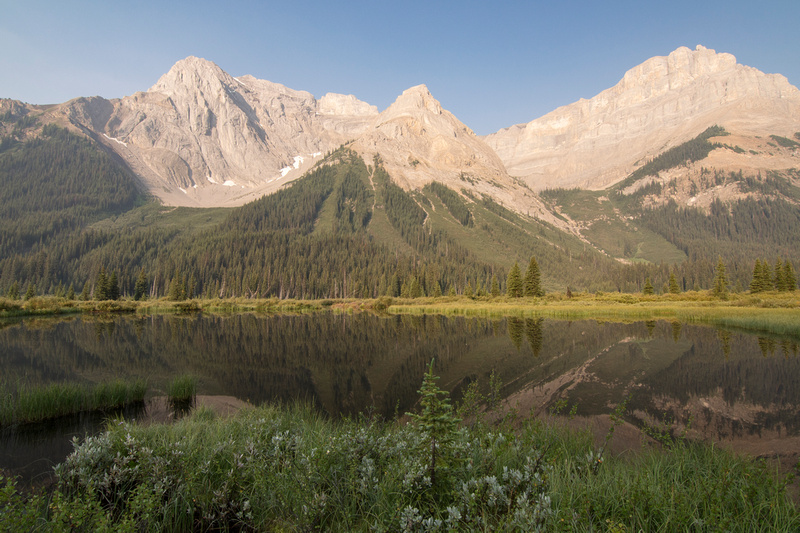 Early in the day, I had met two groups of hikers going the opposite direction, but that was the only sign of humanity in this wild valley.  I reached the junction between the horse and hiker trail over the pass, I had read that the hiker’s trail would be closed to allow the bear’s access to the bountiful amount of berries, but there was nothing indicating the closure.  I questioned whether I was on the right trail and dug my map and trail descriptions out of my bag. I studied the pair of trails before me, and after careful deliberation, I concluded that I wasn’t 100% sure where I was but that the trail to the left was probably good enough, and set off. If it turned out to be the wrong trail, I could always turn around and try again and since I was hiking alone, nobody would have to know that I’d made a mistake. 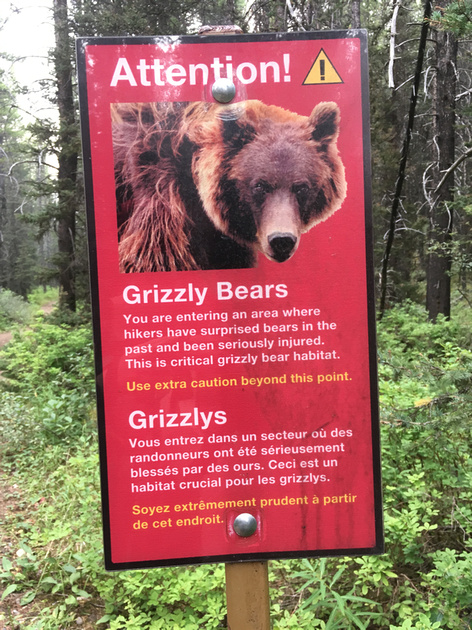 It wasn’t long before I regretted leaving so early in the morning, or heading on the trip solo altogether.  It had been hours since I had seen another person, and the narrow trail I was on had me wading through shoulder height berry bushes. If this was the open trail, I shuddered to think what the closed portion of trail looked like, as this was some of the nicest bear habitat I had seen. I needed to increase the amount of noise I was making in order to travel safely, and I nervously yelled a stream of consciousness into the dense brush.  It wasn’t long before I had crafted a rather fatalistic bear call. “Step Right Up!” I yelled, “Berries here, get them while they’re ripe!” Oh god, I thought, what if they know English. The thought of the stampede of bears rushing towards me in page boy hats, waving five dollar bills made me chuckle nervously.  “Juicy, juicy berries, great for bears! It’s a limited time offer, get them while they’re ripe!”  As much as I craved the safety knowing another person was around, I cringed at the thought of running into them now as I pitched my berry sale up the pass. 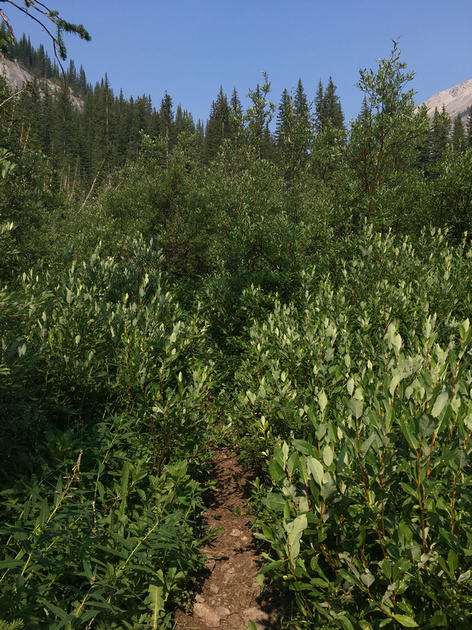 Sure, this seems safe...

The uphill, while generally a gentle grade, was relentless. I tackled the steeper sections with slow, small steps, pausing to rest often. The views weren’t great on the trail, but wildflowers were in abundance and I admired them anytime I stopped moving.  Unfortunately, the bugs were also in abundance and my rests were often cut short to get away from the little pests. I was part way up a particularly steep portion of trail when a strange noise made my heart leap into my throat.  I was woefully unprepared for an encounter of this sort and my mind raced at what I would do if I was attacked.  The noise became louder as I inched forward, on the trail ahead of me was a danger I had not anticipated. Bees. Hundreds of bees.  Like the bees near the lake the night before, they hovered just above ground, and I waded through them carefully. “Don’t stop – just keep moving” I urged myself, though I was in desperate need of a rest to catch my breath. I emerged through the cloud of bees without a single sting and the buzzing noise faded behind me. “Nobody is ever going to believe you.” I thought. Hell, I hardly even believed me.

After what seemed like an eternity of slogging uphill while descending into madness, I reached the top of the pass marking my long imagined entry into Assiniboine Provincial Park. 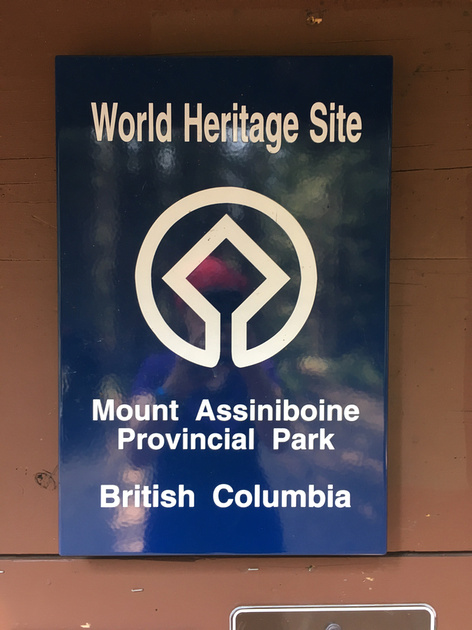 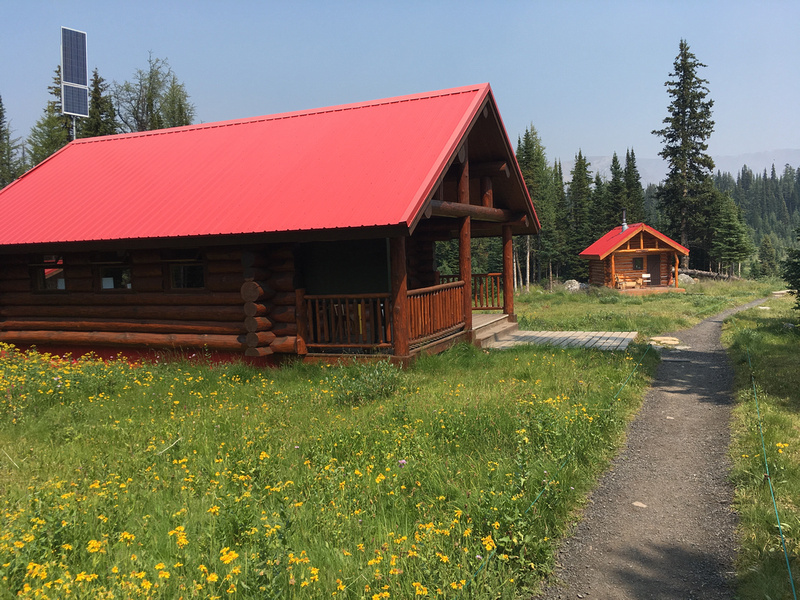 It was here that I finally ran into another group of hikers, and my heart rate slowed down. After a quick lunch and a chat, it was quick and easy travelling to the day’s destination, I was comforted knowing a group had recently travelled through the area.  After years of dreaming about it, I finally made it to this beautiful corner of our country.  My first order of business was to settle in to my bunk bed for a nap.