I woke with a start, my head nodded rhythmically with my heart beat as I sleepily came to terms with my surroundings.  A bustling group of women, four long time friends, had burst through the door of the hut and jolted me awake.  I sat up groggily and checked the time, the women apologized for waking me, and then continued their conversations. It would be the theme for the day, the women later gabbing well in to the night.  I didn’t sleep much anyway, tossing and turning throughout the night. Finally, at 3:30 am I exacted my revenge, unintentionally of course.  I tried to be quiet, but as it turns out, extracting oneself from a sleeping bag and exiting a top bunk on little sleep, in a strange place and in the dark was harder than it sounded. A few bumps and bruises later, I snuck out the door to finish readying myself for the day in the cook shelter. 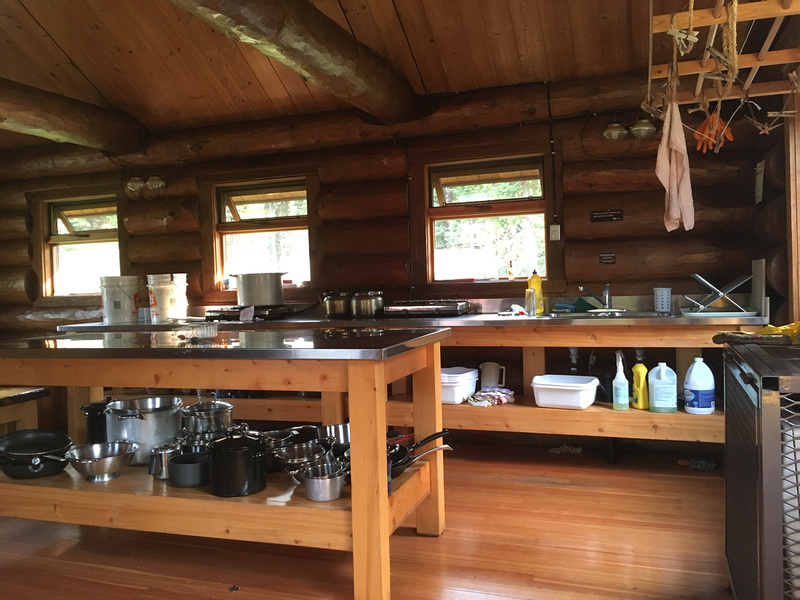 After a gut wrenching breakfast of sugar bars and a sugar drink loosely resembling coffee, I was on the trail.  I hadn’t come this far to be denied a sunrise photo and I yelled my way towards Nub peak. Occasionally, I choked back fear as my head lamp illuminated a small path for me through the forest.  A mother Grizzly and her cubs had been calling the area around the Assiniboine Lodge home all summer, and I was petrified by the thought of running in to her in the darkness.  As the sun began it’s appearance for the day, I crested the Niblet, a scenic high point overlooking the valley and my goal for the morning. I set my camera up and began to settle in for the show.  I glanced at my watch, then at the glowing horizon.  I looked up toward the next high point on the trail, a few hundred metres up the trail, then down at my watch. This view could be better, I thought, and I should have just enough time to find out for sure before the real show begins.  I gathered my things again and practically sprinted up the final slope.  The views, as I suspected, were much better.  I busied myself shooting as many compositions as I could find. Like the first night on the trail, the smoke from nearby forest fires wasn’t doing any favours for the view, but it did make the golden hour last for nearly two. 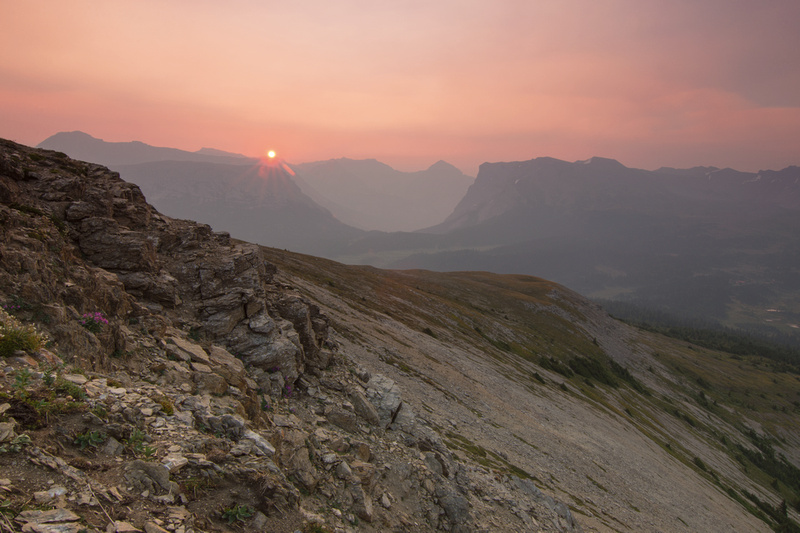 Forest fire smoke made for crappy views, but interesting colours

A marmot came to join me on the grassy slope, and he foraged for breakfast while I foraged for photos. Evidently used to humans, the marmot nibbled grass until it was nearly an arm length away.  I snapped a few photos of my new found model before quietly sneaking away and giving the animal its space back. How nice of him to share this place with me, but its demeanor makes me think he’s seen a few too many hand held goodies in his lifetime. I glowered at the lack of respect shown by hikers before me, but my mood couldn’t be dampened for long. I had spent a glorious few hours in solitude in this mountain kingdom, and I grinned from ear to ear back to the hut. I had settled into a routine of taking short cat naps rather than bother trying to sleep, and after moving my things to the next hut for the night, took another nap.  My new dorm mates woke me up again, but at least they made an effort to be quieter than the last group.  Despite their efforts, I was awake again although not entirely motivated to wander too far from home base. I gathered my things and made my way over to Gog Lake to bask in the afternoon sun. I found a perch at the base of a waterfall to dip my feet and scribble in my notebook for a few hours.  I considered calling in dead to work and attempting to eke out a living from the base of the waterfall for the rest of my life, but a small group of hikers interrupted my daydream and I took their presence as my time to move on.

I returned to Gog Lake after dinner that night, but rather than scope out a suitable foundation to build my new home, I simply settled in to photograph the evening light and hopefully bring a memory home with me instead. I found a particularly scenic place at the lake’s outflow and spent hours waiting for the sunset light to show itself. The light was nice, but I was convinced the best was yet to come and I was torn knowing that I had one more sunrise to shoot, followed by a very long day of hiking the next morning.  I didn’t want to stay up too late, but I also didn’t want to leave empty handed.  I would pack up the camera, move up the trail a few feet only to have the light change or a new composition unveil itself only to unpack the bag and set up the tripod again. This happened several times. Finally, I had to make a grown up decision and drag myself away from the scene and into bed despite the numerous, perfectly good photographs I walked past on my way back to the hut.  I had to at least try to sleep.