The final sunrise alarm rang, I had been lying in bed waiting for it and my feet hit the floor in an instant.  My new polite dorm mates were treated to an equally polite Llisa as I changed out of my pajamas in the dark and quietly grabbed my bag, I snuck out the door far more gracefully than the morning before.  After another breakfast of sugar and sugar coffee I took the short hike towards the lake while vowing to never eat another cereal bar in my life.   I had scoped out a few compositions at Lake Magog on my first evening in the park and I confidently strode down to the shore in the hour before dawn to set up my camera. The smoke had somewhat cleared over night, and I could see faint clouds in the sky. I waded in the water carefully with my camera, I’d managed to go the entire trip so far without some sort of water related mishap, and I wasn’t about to start on my last day. 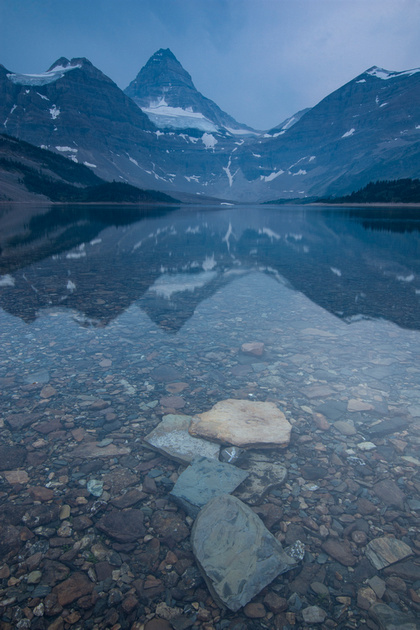 Across the water Assiniboine rose towards the sky, commanding the view and I happily drank it all in. A handful of fish rose to the surface of the lake leaving rings in the glasslike reflection of the water, I had met a number of fishermen in the previous days but surprisingly, none of them were around to throw flies at the fish. 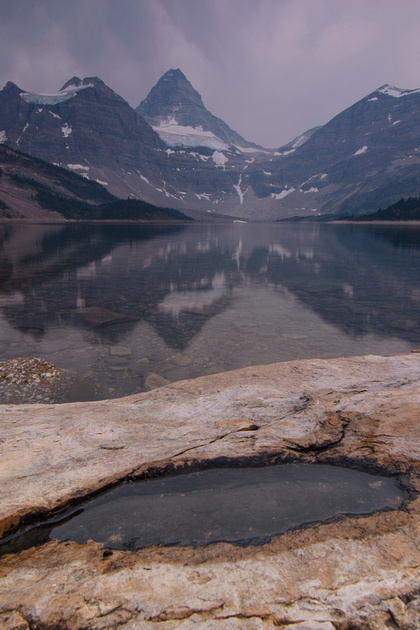 It wasn’t as if I had been expecting there to be hordes of people lined up to take in the views like you might find around easily accessible locations around Banff, but I certainly hadn’t expected to have these locations entirely to myself, especially not every single day.  It wasn’t until I had returned to the hut and begun packing my bag for the long trip home that I ran into people that morning. Still, the moment I left the hut and set off towards Wonder Pass, I was alone again. I didn’t mind the lack of company for the first few hundred metres of my trip, until I passed the place I had spent hours the evening before.  Some time in the 10 hours between leaving Gog Lake and passing by on my hike home the next morning, the resident Grizzly bear had visited and subsequently passed a rather large bowel movement on top of the spot I had been photographing the night before.  I felt insulted, as if the bear had deliberately shat on my photo location and therefore my heart, but the feeling faded quickly with the realization that I now had to hike this stretch alone, knowing the resident Grizzly was around. 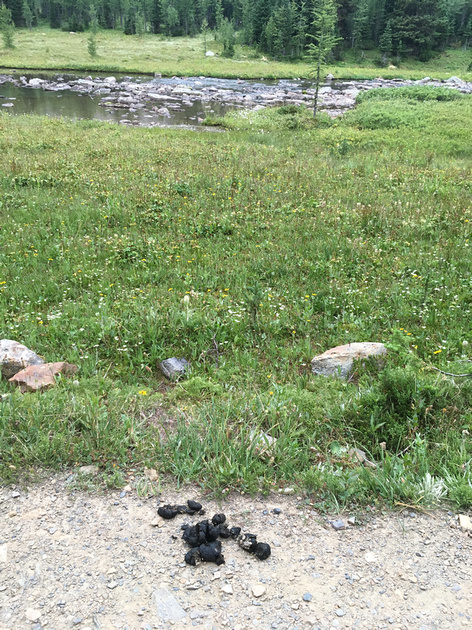 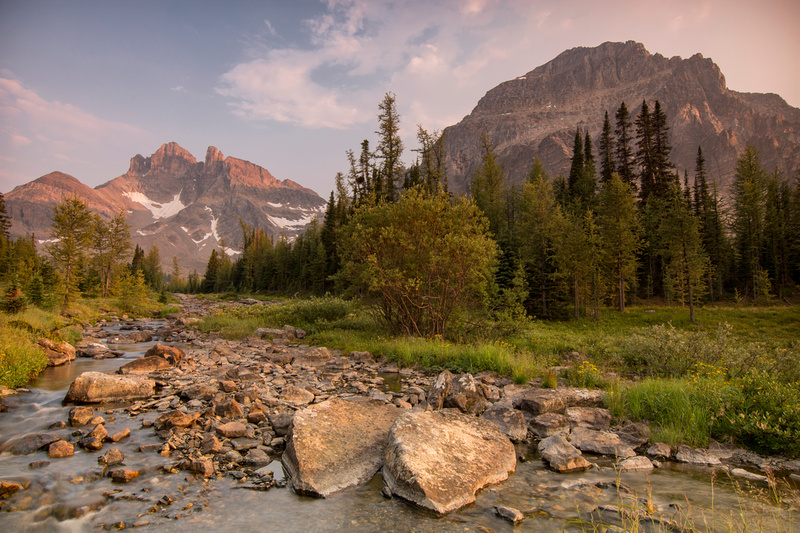 There’s no better motivating factor when hiking than the feeling of “I need to get the hell out of here” and I yelled my way towards the pass.  Just before I began the climb, I stopped and filled my water bottle in a creek, and fortuitously, a group of four day hikers came in to view. It wasn’t long before they had surpassed me on the trail, and I calmed knowing their chatter ahead of me would give any bear that might be ahead some advance warning on my behalf.

To my surprise, I crested Wonder Pass fairly quickly and easily. With the word “Pass” in the name I had braced myself for a long uphill slog, but the elevated starting point of the hike worked to my advantage.  I paused briefly at the summit to snap a photo before being chased off the pass by curious bees.  This time the bees weren’t hovering around my feet, instead they were hungrily eyeing the satchel of seeds and dried beef I had stuffed into my pants pockets. I didn’t need the extra incentive to get on the trail again, damn bees weren’t going to get any of my beef jerky if I had anything to say about it. 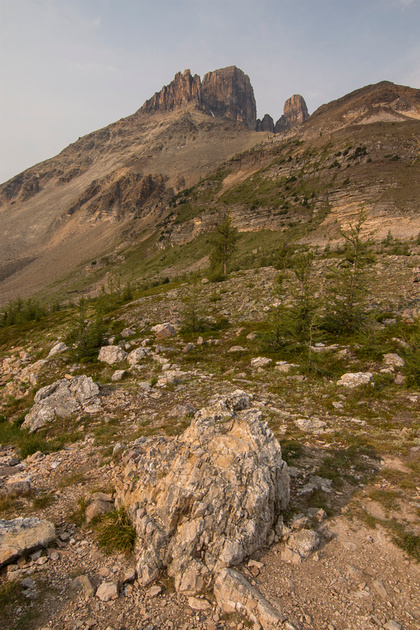 It wasn’t long before the group of hikers ahead of me faded from sight and I was alone again, picking my way down the trail toward Marvel Lake while picking food out of my pockets.  The elevation loss was steady, and while downhill is usually my favourite kind of hiking, my toes were beginning to complain. A lot. I’d barely made it off the pass and started along Marvel Lake when the pain really began to set in and I began to stop every so often to readjust my boots. Despite the trail levelling, the boot situation worsened. I’d tighten the laces and loosen the laces, pull up my socks and change my socks but to no relief.  While the trail was level, the slope it was carved into was steep and I struggled to get into my backpack after fixing my boots. At one point, I slipped down the slope, tumbling face first into the scree with the weight of the pack crushing down on me. I cursed at my clumsiness as I struggled to right myself and step back onto level ground.  Later, I tripped on thin air and the weight of the pack sent me tumbling on to the trail. “What the hell?!” the fatigue of the previous days was beginning to take its toll on my concentration and I promised myself I would stop and take stock of the situation once I reached the 13 kilometre mark. 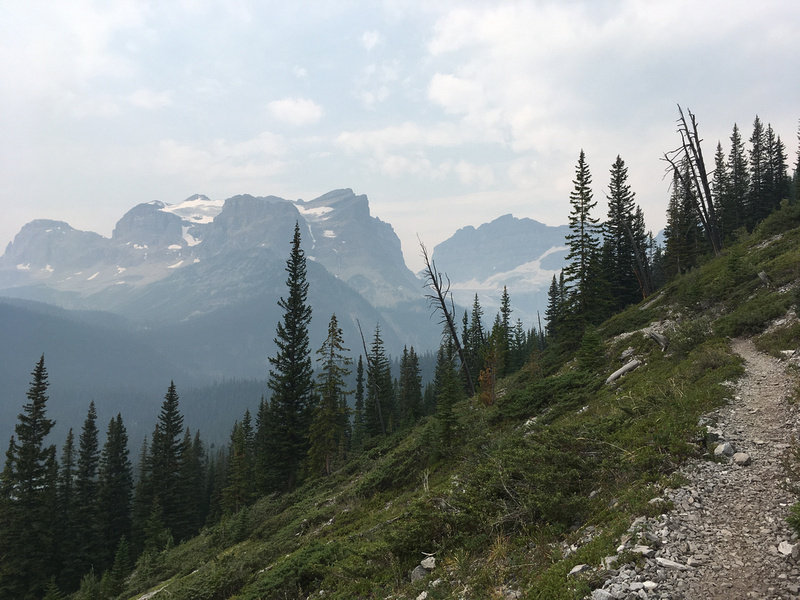 Nice gentle slopes to fall down

Finally, I hobbled up to Bryant Creek, dropped my bag and stuck my poor feet into the water.  The campsite I had booked was a mere kilometre away, but it was only 1 pm. I nibbled on some lunch and pondered my options. It was Saturday, and between excitement, cold temperatures and general hut life, I hadn’t managed to get a good night’s sleep since the previous Monday. I had little hope of getting any more sleep in a tent.  The thought of my own bed, and actually being able to sleep was enough to forego any further pondering.  I removed a set of insoles from my boots to give my toes a bit more room, repacked my bag and gingerly stepped away from the river bank. While I was resting, another swarm of bees had surrounded me. What is it with these bees?  With the insoles removed, the boots felt a little better but the damage to my toes had already begun and a single toenail on each foot had begun to blacken.   Knowing that I would have day light until at least 10 pm, I made a plan to hike slowly and take a rest to soak my feet at every major creek crossing, I also took the liberty of soaking my shirt to stave off some of the mid day heat. I kicked myself for not thinking of it three days ago, although I had obviously started the hike with a bit more dignity than I was finishing it.

Besides the pain in my feet, the long hill I had descended on my first day of hiking was now also weighing heavily in my mind, as I needed to get to the top of it in order to get home.  With every passing kilometre, the uphill sections never seemed quite as bad as I had imagined and I started to believe I might have exaggerated its significance. At the final creek crossing, I believed I was going to get away with avoiding going up the long hill altogether, and then I reached the bottom of the hill.  The path that stretched before me was far taller and far steeper than anything I had climbed in the days prior.  At the top of the hill, and seemingly in a very un-scenic and arbitrary location, sat a bench.  I decided that when I reached that bench, I was going to sit on it, and so I began the longest 100 metre uphill section of the trail.

After far too long, I reached the top of the final hill and the bench came in to view.  I mercifully collapsed on to its surface. It was at that point that the rain forecasted for the day began to catch up to me.  What the forecast had failed to mention, was that the rain was bringing with it a great deal of wind and lightning. I had barely sat down for my preapproved rest, when I was so rudely spurred back on to my feet again with a sense of urgency.  A storm had appeared from behind the mountains and was fast approaching me. The last four kilometres of trail that I had to travel on was on a fire road sorely lacking in cover, with lightning in the distance and my person covered in a fine assortment of lightning rods, I needed to get moving.

My normal 2 kilometre an hour pace quickened to 4 kilometres an hour.  Fat rain drops began to pelt my face.  The 4 kilometre an hour pace was increased to five kilometres an hour.  My toes screamed at the pain as the wind picked up.  In the forest next to the trail, trees began to sway wildly.  The jolting crack of a tree breaking in the wind made my heart jump into my throat as my pace quickened to 6 kilometres an hour. The bear spray hanging from my shoulder strap pelted me in the face as I speed waddled down the trail.  The time between the flash of lightning and the clap of thunder lessened as the storm grew near, every piece of me screamed to slow down, to rest. I chuckled at the thought of emerging unscathed after 70 kilometres of solo hiking, often in the dark,  over the past few days only to be wiped out by a tree or a lightning bolt a mere kilometre from the truck. Finally, the parking lot came in to view again and I leapt in to the truck, moments later the storm hit with full force and pelted my windshield in a down pour, “Do you want to go out for dinner tonight?” I texted Mr. Bastard, a full day ahead of schedule “I could really go for a burger and a beer”. 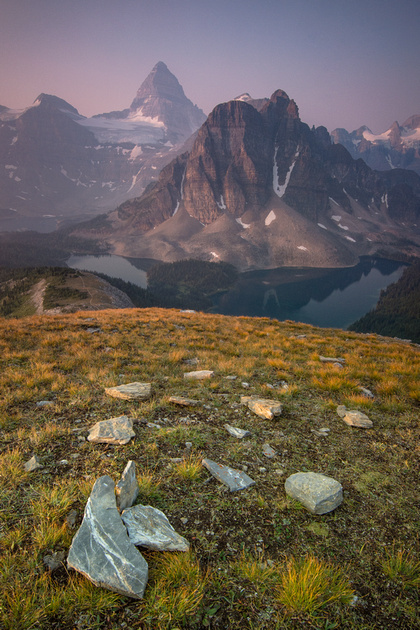