The clock read 10:43 pm as I set my alarm to ring at midnight, a mere hour and seventeen minutes to fall asleep and wake up again. "Photography is a stupid hobby" I muttered to myself, and shut off the bedside lamp. Instantaneously, the "It's 12:30, you're late, you should probably skip the shower" alarm rang and I bolted out of bed before I had the chance to protest.  Not this time Llisa. Not this time.

Approximately 30 minutes prior, at the ringing of the first alarm, I had somehow convinced myself that I was definitely awake and was only going to rest my eyes for a few minutes before getting out of bed. I had accomplished this by placing my left foot on the ground and promptly falling asleep. The memories of the incident are hazy, but the outcome was clear - I had fallen for the oldest line in the book. The morning's objective was to be in the mountains and well above tree line before the sun rose, I did some mental math to calculate sunrise minus drive and hiking time and decided to ignore the alarm clock for a second time that morning. Despite the warning on the alarm clock to skip the shower, I turned on the bathtub faucet and stepped in to the tub. I figured cleaning the dirt off could only help a person become more aerodynamic, and I could use all the help I could get now that I was behind schedule. 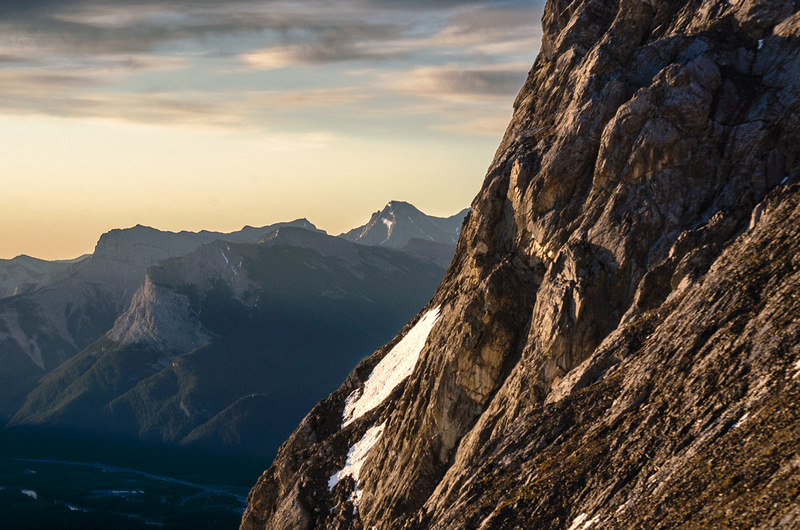 The familiar drive from Calgary to Canmore, punctuated by dots of light on the horizon from approaching cars, was made more interesting by making up the life story of the occupants.  What kind of crazy person would be out driving at this time of day, I wondered as I daydreamed my way West. In a flash, I pulled in to the trail head parking lot.  The drive had flown by, yet somehow, I was still 30 minutes behind schedule.

Normally, my pre-dawn-pre-hike routine starts by cracking the door of the truck open an inch to let some reality in, followed by the talking into or out of what I have planned, carefully weighing pros (sunrise photos) and cons (might miss the sunrise and this will be a waste of time, death) The culmination of the talk can end one of two ways, either the door is flung open and a pair of hiking boots hit the ground, or the door is carefully shut, ignition key turned and I retreat feeling a little bit sheepish. On this day however, the schedule was too tight for pep talks, and my boots hit the ground before I had a chance to properly consider my options.

Having hiked the Ha Ling trail once before, in the daytime, two years ago, with a horde of fellow hikers, I was fairly confident in my ability to hike it again, in the dark, alone.  I reached the obvious monument marking the beginning of the trail with ease and I commended myself on my excellent route finding abilities as I stepped into the forest. The glow of my headlamp illuminated the gnarled tree roots exposed by thousands of boots, and I picked my way over every tripping hazard, slowly forging upward. Occasionally, I would find myself in a grove of bushes, and once, I found myself with toes toward a rather intimidating cliff overlooking the valley.  Each time I would use my superior deduction and route finding skills to figure out that wasn't part of the trail, turn myself one hundred eighty degrees, and follow my flashlight towards a safer, more easily travelled path.  My underwear was clean, but it wasn't emergency room clean and I wouldn't want to embarrass my mother like that. Not today Llisa. Not today. 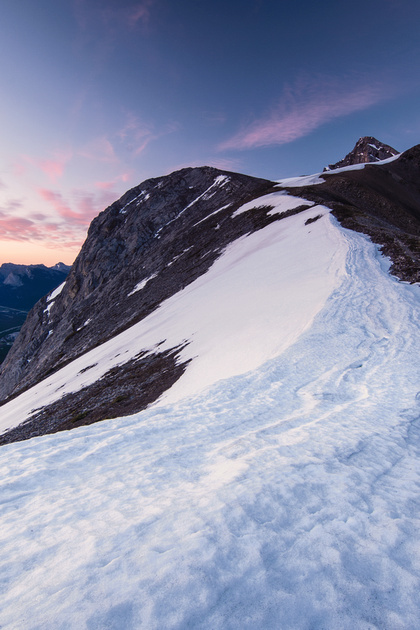 If there's one thing I have learned about hiking over the past few years, it's the importance of pace. My own pace is an embarrassing rate at which to travel. It's not unlike an octogenarian's epic journey toward the bathroom light at 2 o'clock in the morning. I move forward a mere six inches at a time, my feet barely crossing in front of each other, at turtle speed. I'm painfully aware that I look like I might keel over and die at any second, but oddly enough, with my old man mountain shuffle I can now complete hikes in a fraction of the time they used to take me, without getting too tired.  It's doubly satisfying to shamble past hikers who previously left me in their dust on their numerous breaks, but that is a daytime hiker's game and there was nothing on this trail to race except the quickly approaching dawn.

It could have been my old man mountain shuffle that brought me above treeline well ahead of schedule, or perhaps it was my freshly shorn legs and lusciously shampooed hair cutting down on wind resistance. I set my camera bag down right in the middle of the saddle between Ha Ling and Miner's Peak, not only before sunrise, but with enough time to spare to change into some warmer clothes, brew a cup of instant coffee and settle in for the show. The wind howled high above Canmore, and I teetered around with my tripod for stability, bracing myself against the force.  I found a little bit of shelter behind a boulder and observed tiny specks of hikers far in the distance, giving scale to the immense rock walls below them. I silently saluted their insomniac insanity, and snapped a photo. 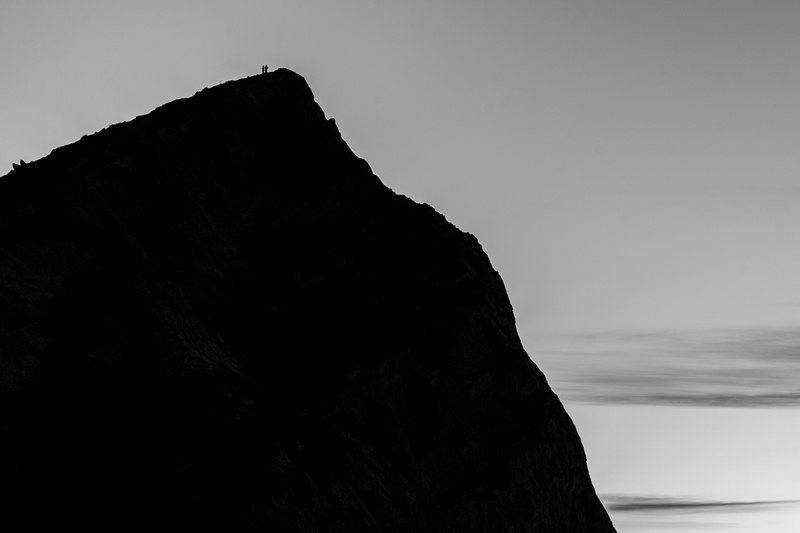 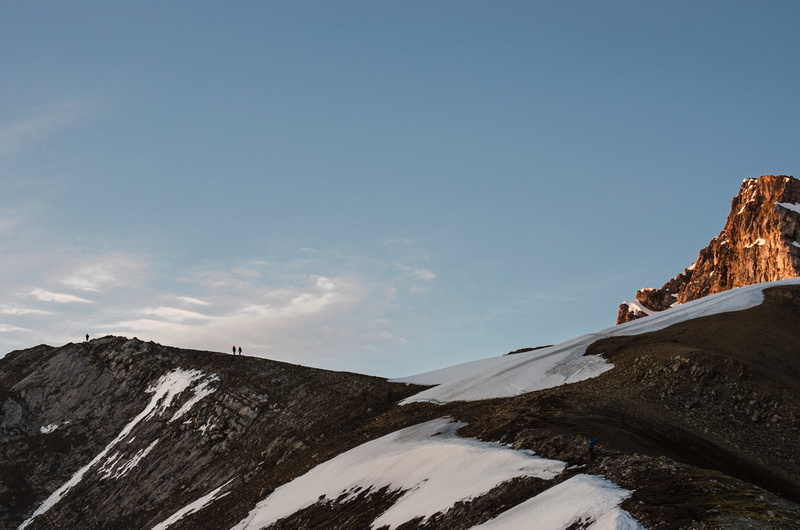 As the sun rose in the East, it lit up the mountain underneath my feet in an orange glow and I marvelled in every direction. The warmth of my blue speckled enamel coffee mug touched my lips and I drank it all in, both the coffee and views.   The camera was poised and ready, but I ignored it for a moment in order to fully appreciate the scene unfolding before me as the clouds turned a brilliant pink and the first rays of sun touched my face.  I always thought it was a shame that more people don't put the extra effort in to witness the sun rise, but as I stood there beaming back at the sun, I didn't mind the lack of company. Maybe photography wasn't such a stupid hobby after all. 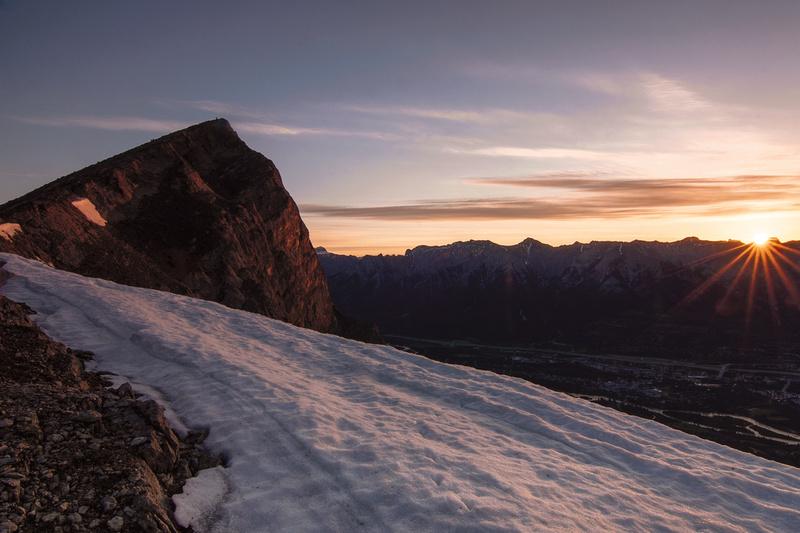 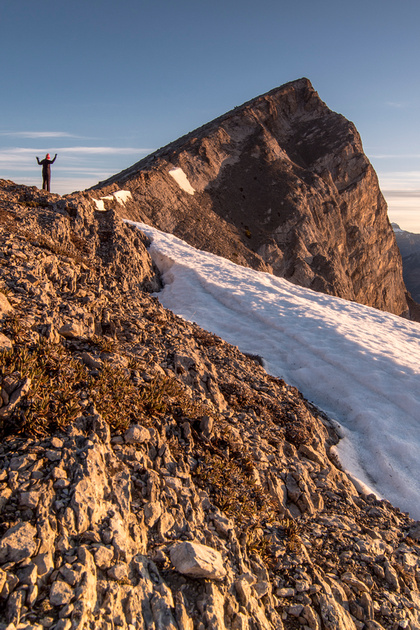